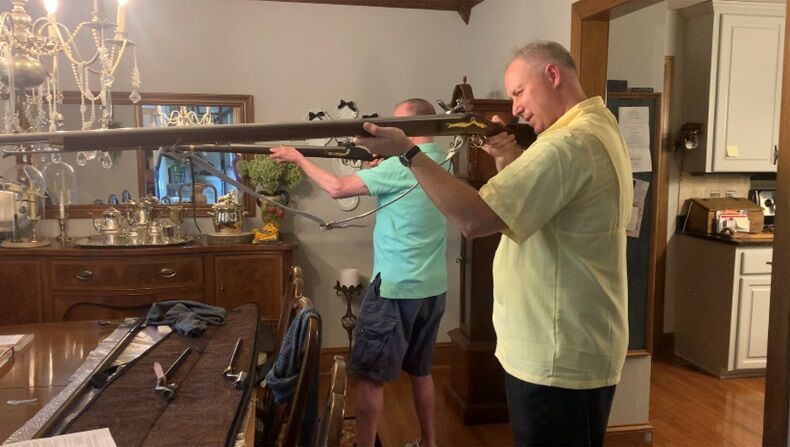 Pictured, from left, are Robert Patton and David Gercken holding reproductions of Colonial-era muskets and recreating what it would have been like to fire them on the field of battle. 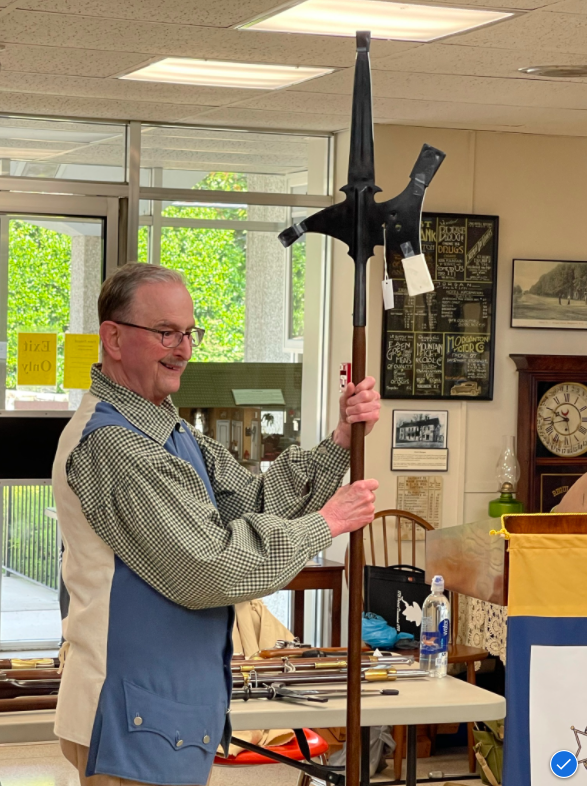 Robert Patton shows a halberd while wearing a Colonial-style costume at a Sons of the American Revolution presentation to local Eagle scouts at the History Museum of Burke County in August. 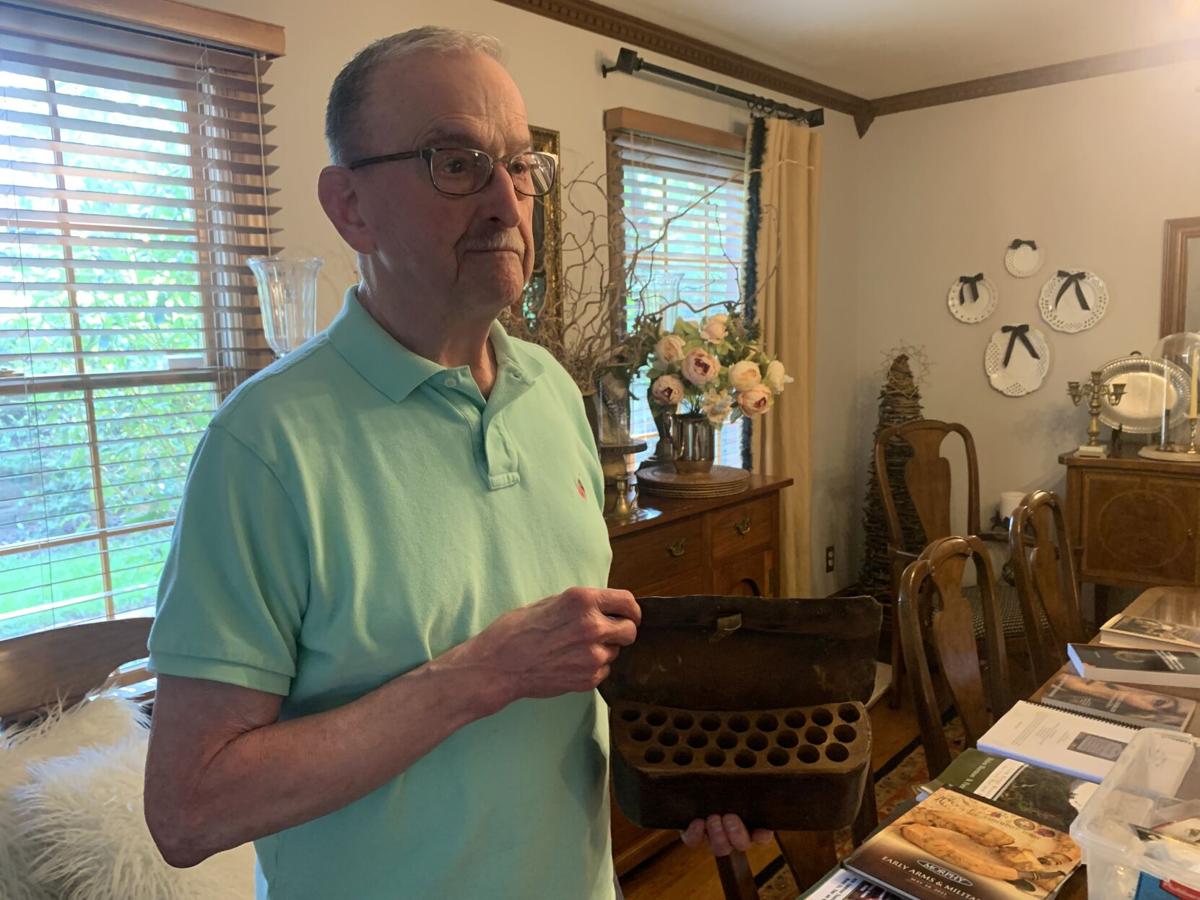 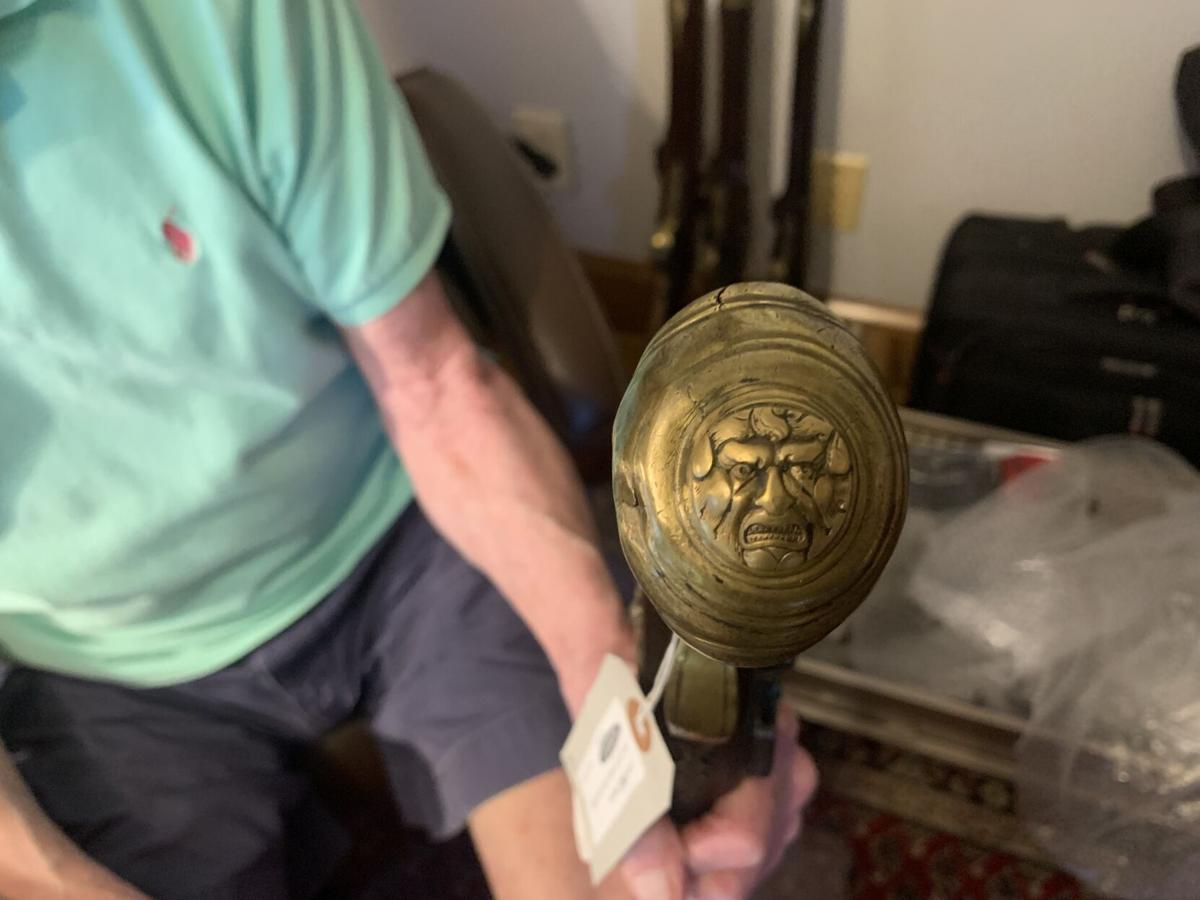 Robert Patton shows a detail engraved on the bottom of a pistol made in the 1760s. 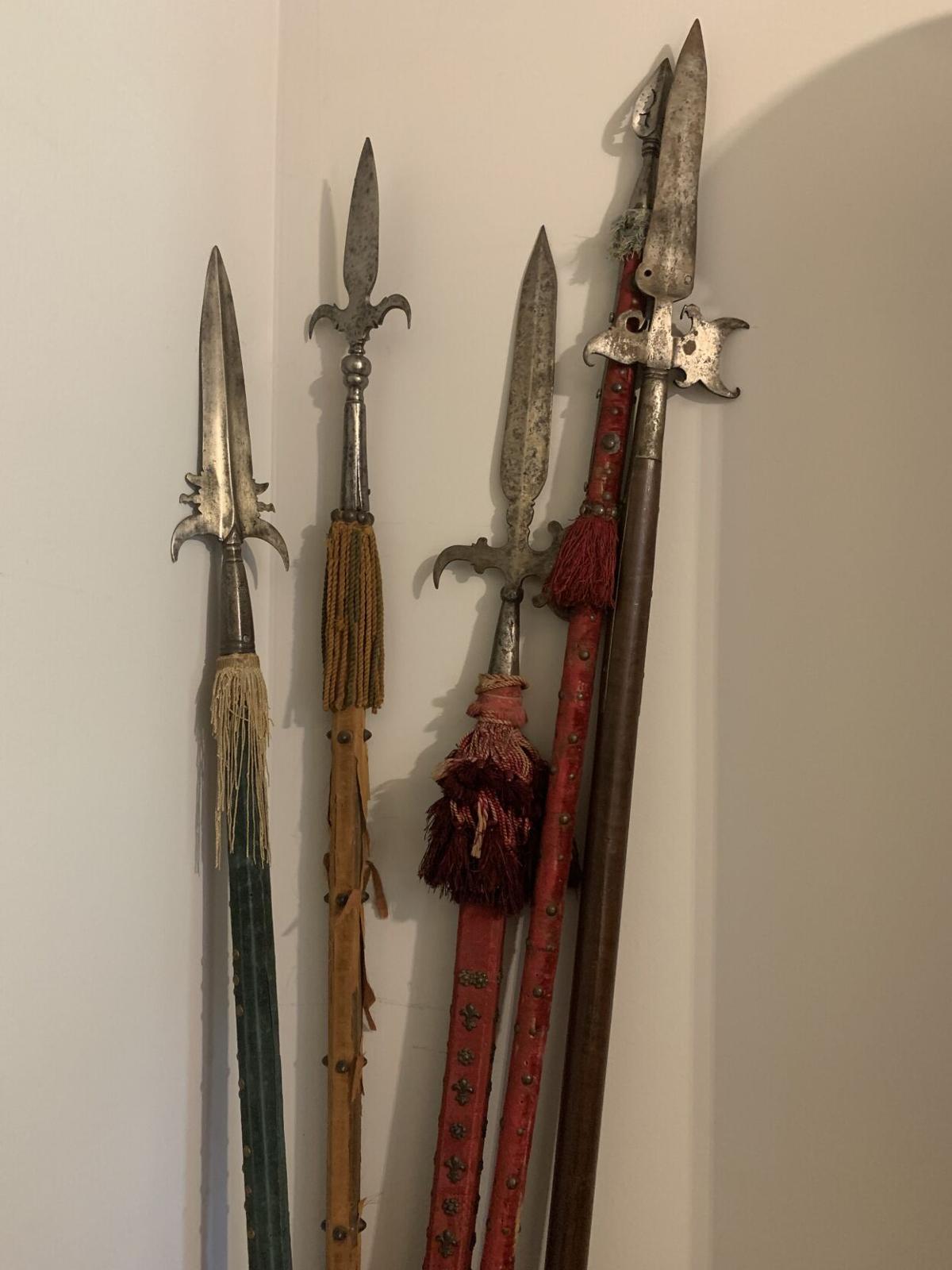 Pictured are a variety of halberds and spontoons from Robert Patton's collection. 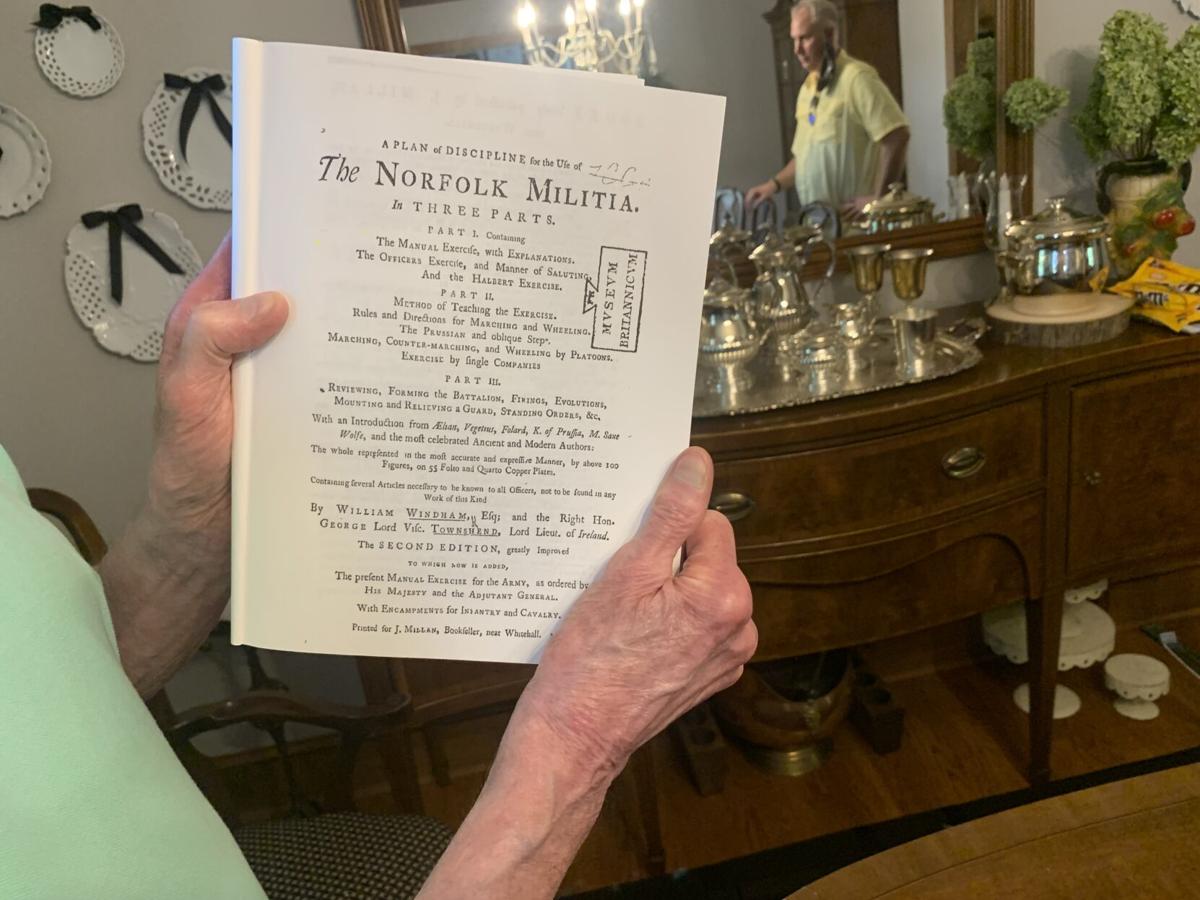 Robert Patton shows a page from a reproduction of an 18th century military training manual, called a "plan of discipline."

I’ve long been interested in Colonial-era history, so when I had an opportunity to see an extensive collection of authentic and reproduction Revolutionary War weapons, of course I went.

Burke County resident Robert Patton had invited my husband, David, and me to his house to view his collection. As president of the Col. Alexander Erwin chapter of the Sons of the American Revolution, Robert had already shared some local Colonial history with me. And his family lived it. He is the seventh consecutive Robert Patton to live in the area.

“My fifth great-grandfather lived on Bob Patton’s Creek, 1 ½ miles south of I-40 on N.C. 226, in the 1760s,” Robert said. “He probably moved away from there because of the Indians and moved down to Main Muddy Creek.”

He died in 1772. His son, Capt. Robert Patton, a light horse cavalry captain in the Revolutionary War, fought at the Battle of Kings Mountain and the Battle of Cowpens.

Many in the community are familiar with the role Morganton played in the Battle of Kings Mountain. More than 1,400 patriot troops stopped at Charles McDowell’s house at Quaker Meadows Plantation in Morganton on Sept. 30, 1780, to prepare for the battle that turned the tide of the war in America’s favor.

Capt. Patton survived the war and died in 1813.

A paper written by Robert’s distant cousin documenting the Patton family history and genealogy also sparked his interest in the Colonial era.

“I reckon I’ve got 13 Revolutionary War patriots I have identified,” Robert said.

I knew we were in for a treat when we walked into his dining room to find a triangular-shaped axe lying on the dining room table with a handle as long as table itself. Robert told us this was a halberd.

“A halberd is a spear with an axe out one side and a spike out the opposite side,” he said. “During the Revolutionary War, the Continental Army used halberds. On Dec. 22, 1777, at Valley Forge, George Washington entered a general order for all of his lower ranked officers to carry a halberd or spontoon (a spear with smaller hooks coming out of main point instead of blades). Another general was to direct the making of them to the forge. They had forges everywhere they went, because they had to fix stuff all the time. It didn’t take a lot of time to make a bunch of them, and they were cheap.”

The halberd and the spontoon are called “pole weapons,” which were used by foot soldiers to spear the horses of cavalry officers to get them on the ground. Robert has two halberds and three spontoons.

Robert next showed us a pair of box-lock, screw-barrel pistols, also called “pocket pistols.” He handed one to each of us and had us cock the pistols to show how the trigger popped down from the intricately engraved silver cover on the barrel when the cocking lever was pulled back. The detail and craftsmanship were remarkable, especially considering it was all done by hand at that time.

A pistol he showed later, dating to the 1760s, had engraved bronze panels that depicted two men chasing each other on horseback with pistols drawn. The story ended with one combatant’s murder. It was a work of art. Robert noted there was a “2” engraved on the gun, likely meaning it was one of a pair of pistols, and that the other pistol depicts the first part of the tale.

Robert’s reproduction firearms were made in other countries, such as India and Italy, and then shipped to an American company that disassembles and reassembles them and fires them to make sure they were made properly.

The reproduction muskets were more than 5-feet long and incredibly heavy. One was called a “Brown Bess,” which the British used during the Revolutionary War, and the other was a French-style musket called a “St. Etienne.”

“The French made tens of thousands of guns for us and shipped them over here,” Robert said.

The muskets had bayonets that attached to them, long blades used in close combat. He pointed out that the blades are triangular to inflict more damage when used.

One period gun Robert showed us had an iron bracket attached to the wooden stock. He said the stock had cracked, and that was how they fixed it. Soldiers often used their guns like clubs on enemy soldiers when they ran out of ammunition, so that type of damage was common.

He also showed us a rifle cartridge case that would attach to a soldier’s belt. The case contained a wooden block with holes in it that would hold the cartridges.

I marveled thinking that each soldier had to drag along multiple heavy and unwieldly weapons – musket, pistol, halberd, hatchet, knife — as well as food, ammunition and other supplies, for miles on end every time they marched. Robert said officers and cavalry soldiers also were required to carry swords.

In addition, they trained regularly with their weapons. Robert read from a militia training manual, called a “plan of discipline,” that described the various positions and movements the soldiers had to perform with their halberds. The routine was so intricate it included how many inches the halberd was to touch the ground from the soldier’s foot and what direction the soldier’s knuckles were supposed to face when holding the weapon.

Viewing the collection gave me a new perspective and renewed respect for our local patriots — ordinary people who overcame formidable obstacles and endured unimaginable hardships to become soldiers who won the battle for freedom and forged a new nation.

Tammie Gercken is a staff writer and a member of the Morganton Writers’ Group. She can be reached at tgercken@morganton.com.

VALDESE — Armed with a new ordinance approved on Tuesday, Burke County Animal Services seized two emaciated and injured horses from a farm in …

Morganton officers are looking for a woman who was last seen Saturday.

Pictured, from left, are Robert Patton and David Gercken holding reproductions of Colonial-era muskets and recreating what it would have been like to fire them on the field of battle.

Robert Patton shows a halberd while wearing a Colonial-style costume at a Sons of the American Revolution presentation to local Eagle scouts at the History Museum of Burke County in August.

Robert Patton shows a detail engraved on the bottom of a pistol made in the 1760s.

Pictured are a variety of halberds and spontoons from Robert Patton's collection.

Robert Patton shows a page from a reproduction of an 18th century military training manual, called a "plan of discipline."