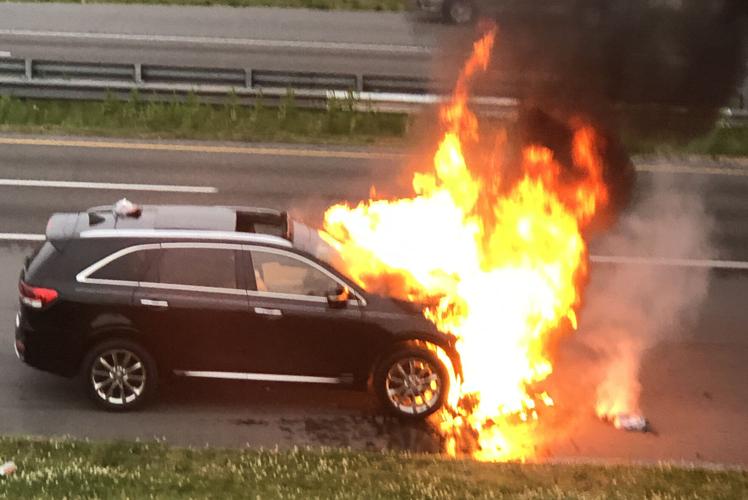 The driver of the car told The News Herald she didn’t realize the car was on fire until someone got her to pull over. 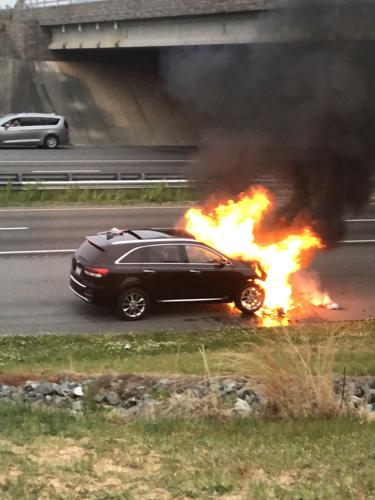 Flames swallow the front half of a woman's Kia Sorento on Interstate 40 at Exit 104 on May 18.

If it had been any other day, Helen Miller would have had her son in her car with her on her way home from work May 18.

But since it was a Tuesday, and she got off early, she was driving down Interstate 40 alone when her 2017 Kia Sorento VX SXL AWD caught fire.

She was none the wiser to the flames licking up from the passenger wheel well of her car, only finding out about them when a man motioned for her to pull over. She drove for about a mile without pulling over because she couldn’t tell the car was on fire and couldn’t figure out what the man wanted.

When she finally pulled over, it was because she could see a state trooper on the side of the road up ahead of her. She finally got out of the car after the man told her the car was on fire, and by the time she walked to the hood of the car, the whole front end of the car was engulfed in flames.

Miller said she scurried up the Exit 104 ramp to get away from the car, moving as far away from the flames as she could. The fire was extinguished by the Morganton Department of Public Safety. A report from MDPS said

She found out that her injuries won’t be covered by insurance since she got them once she got out of the car.

“I’ve been driving around on a bomb,” Miller said. “If my grandson would have been in the third row seat, I would’ve burnt to death getting him out, I know what would happen. The kids would’ve been out of the car. One way or another, kids were coming out of the car, but I may not have … the what-ifs is what kill me.”

And while the what-ifs might not matter in court, they’re all Miller has been able to think about over the last week and some change, she said.

“Mentally, what-ifs is why I can’t sleep or eat,” Miller said. “I have to have somebody come light the pilot light because the Wednesday, the day after it happened when I still thought I was fine, until I lit the pilot light and just the whoosh and the flame? Well, then I sat here and cried for four hours straight and I couldn’t stop. And that’s when I realized, ‘Oh no, I’m not okay.’ Obviously I’m in shock.”

The sleepless nights have led to Miller diving through page after page of research on the National Highway Traffic Safety Administration website for potential recalls.

And while a search for the vehicle identification number for Miller’s vehicle on the NHTSA website showed that there were no unrepaired recalls on her vehicle, a search for complaints on the vehicle showed reports of similar instances to what Miller experienced May 18.

A driver from Cottage Grove, Minnesota, reported that her car caught fire July 5 while they were driving down the road. She said after about two hours of driving, the oil light came on while she was stopped at a traffic light. Her son rolled down his car window and told her the car was on fire, and the brakes on the vehicle went out.

That driver said she got the car slowed down to about 10-20 mph and told her son to jump out of the moving car. She eventually had to do the same thing, she said in the complaint filed with the NHTSA.

Another driver from Chester Springs, Pennsylvania, reported that their car caught fire driving around 65 mph. The driver and their daughters exited the car in time to watch the vehicle and its contents burn, according to their complaint on the NHTSA website.

On May 18, Kia recalled Sorento SUVs from 2014 and 2015 and Optima sedans from 2013-15 for a fire risk, according to previous reports from the Associated Press. The recall affected more than 440,000 cars and SUVs, and was the second time those vehicles were recalled for fire risks.

The News Herald reached out to Kia about the issue. James Bell, head of public relations for Kia America, told the newspaper it would take some time to look into any specific issues surrounding Miller’s car, but offered a statement about how the company decides to issue recalls.

“Kia is proud of its strong safety record and the integrity of our products and all Kia vehicles sold in the United States meet or exceed all federal government vehicle safety standards,” said a statement Bell sent to the paper for Kia.

Kia said in its statement that vehicle fires could be caused by “any number of complex factors” and that those factors have to be evaluated by trained technicians to determine the cause of the fire.

“If a fire is determined to be the issue of a Kia manufacturing issue, KMA will work with the customer to reach a satisfactory resolution to the matter,” the statement said.

The statement said any safety defects detected during vehicle monitoring are reported to the NHTSA within five days and a voluntary recall is conducted.

Any Kia customers with questions about their vehicle can call the company’s consumer assistance center directly at 1-800-333-4542.

Morganton is one step closer to adding a critical service for local residents diagnosed with serious mental illness.

A person had to be airlifted after a crash Monday evening in Morganton.

By popular demand, a school cafeteria standard made an encore appearance in Burke County for one day only.

Deputies are searching for a man after a break-in at a church early Tuesday morning.

A 2.2 earthquake registered northwest of Charlotte in Catawba County early Wednesday, May 11, according to the U.S. Geological Survey. It happened at 12:41 a.m. and was centered about 1.8 miles east, southeast of the Catawba community, the USGS says. A depth has not yet been reported. Catawba is about 50 miles northwest of uptown Charlotte, along the Catawba River, and has a population of ...

The driver of the car told The News Herald she didn’t realize the car was on fire until someone got her to pull over.

Flames swallow the front half of a woman's Kia Sorento on Interstate 40 at Exit 104 on May 18.