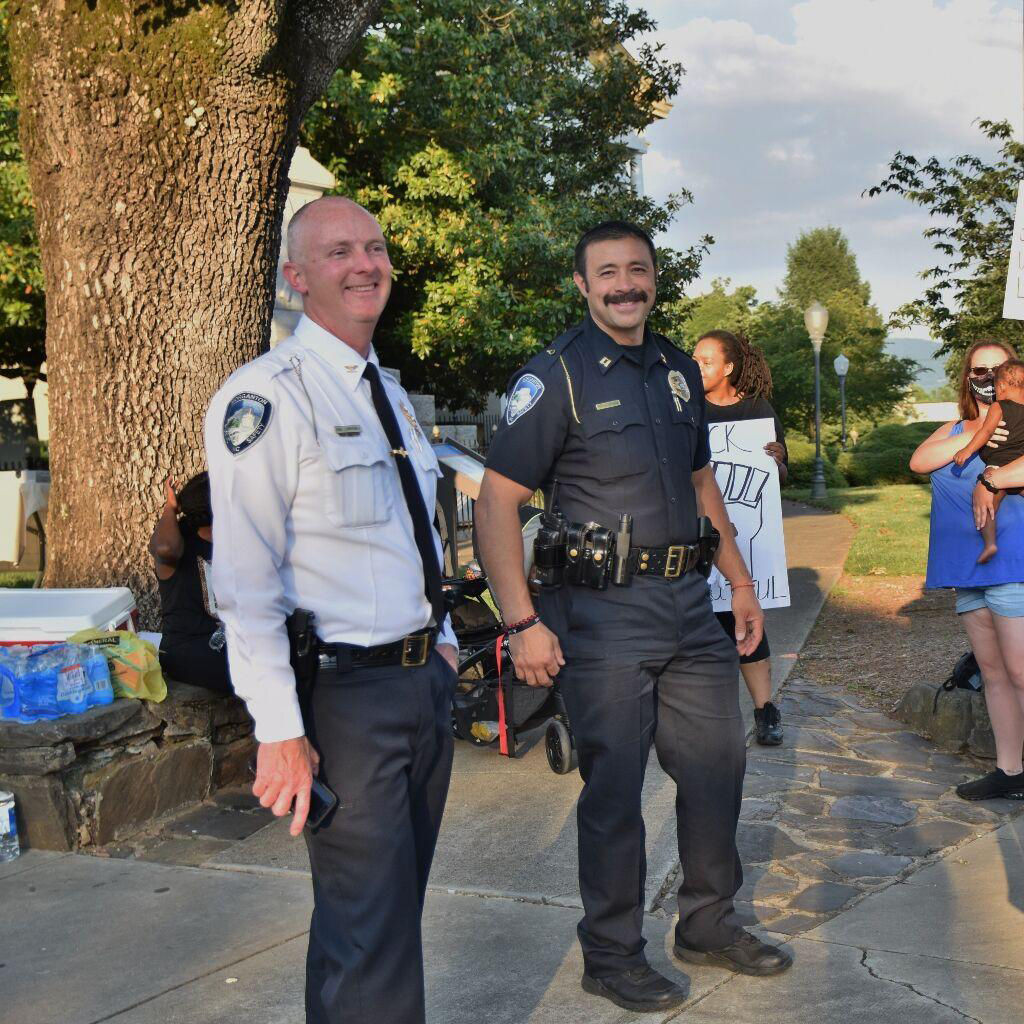 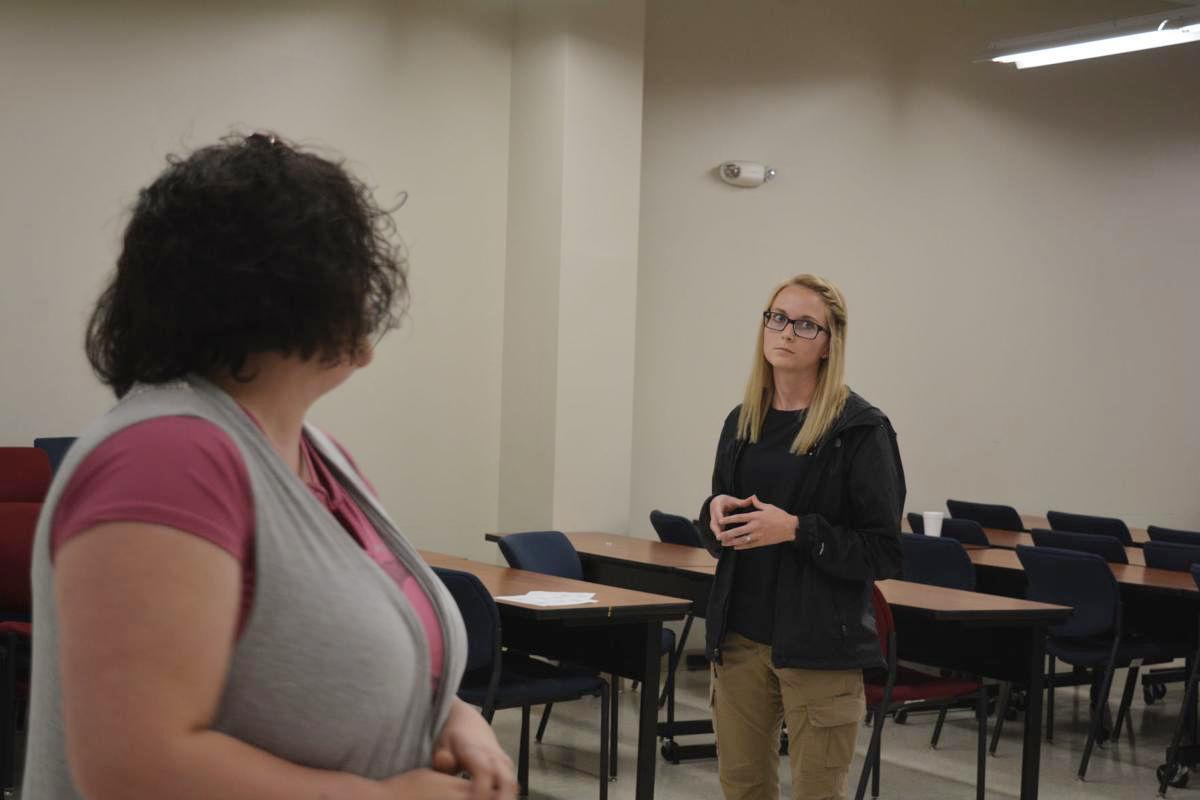 MDPS Officer J. Bess (right) goes through a scenario with an actor during a 2019 crisis training course. 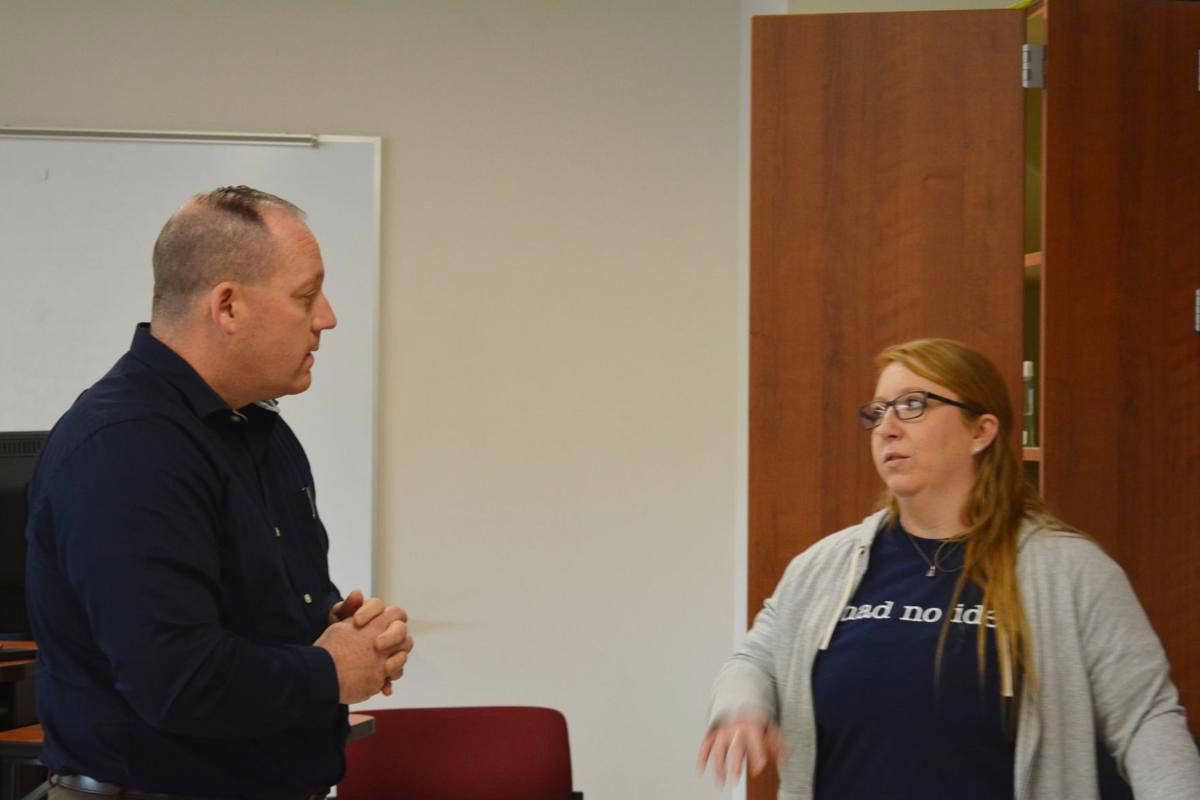 MDPS Lt. T. Corriveau (left) goes through a scenario where the caller was battling mental health problems during a 2019 crisis training. 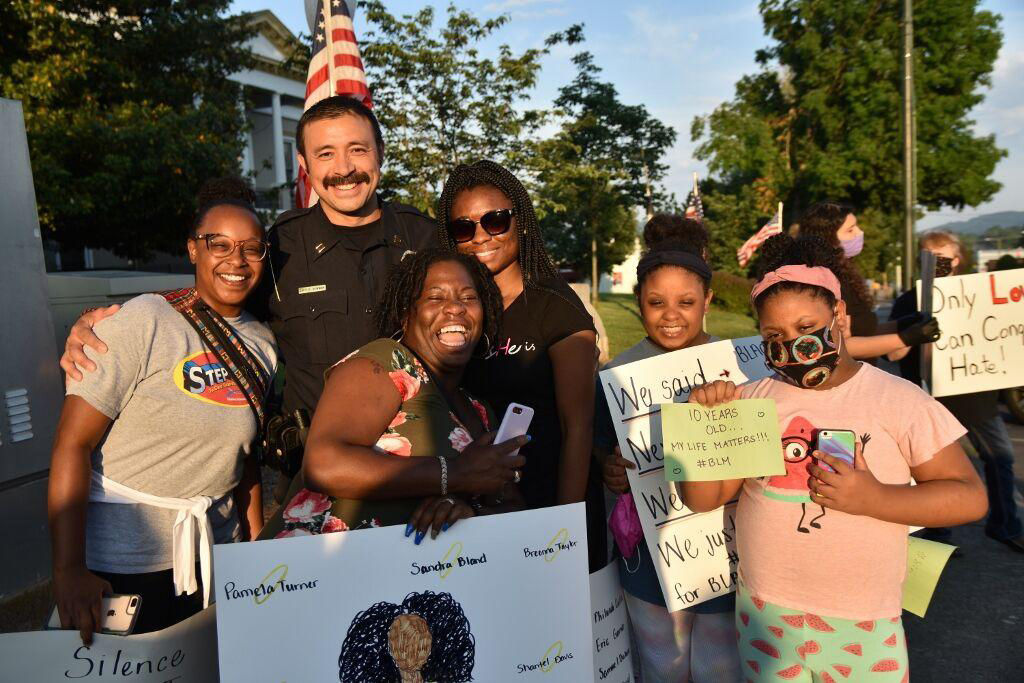 Capt. Keith Bowman (second from left) poses for a photo with a family at a recent protest in downtown Morganton.

City law enforcement officials have taken a look at how their policies match up with a national campaign that aims to put a stop to police brutality.

“8 Can’t Wait,” a project by Campaign Zero, proposes eight policies that police departments could implement that the organization said could reduce killings by police and save lives, according to the campaign’s website.

MDPS Chief Tony Lowdermilk and Maj. Ryan Lander spoke to The News Herald on Tuesday about the department’s current policies and their similarities to the project.

One of the policies promoted by 8 Can’t Wait is a use-of-force continuum, which would provide a specific series of actions officers should apply when using force. Lowdermilk explained why MDPS doesn’t use that policy.

“The reason we don’t have that guidance to say you need to go to this first is because every situation is different,” Lowdermilk said. “Every use of force encounter is different, so our policy says you need to use the force that is reasonable ... against what that person is presenting to you.”

He gave the example that an officer of a smaller stature, maybe 5-foot-1-inch tall, versus a suspect who is 6-foot-3-inches tall, the amount of force they would need to use to gain control of a combative suspect could be different than what a 6-foot-2-inch officer would use.

Lander spoke about the history of the use of force continuum. He said that a few decades ago, they were developed by trainers to help train officers in using force. Those ended up getting put in policies, but he said that might have been misguided.

He said that it might not be reasonable for an officer to follow a specific set of actions on a use of force continuum.

“The more that you sit there and wrestle with somebody, the more dangerous a situation can become,” Lander said.

The use of force continuums also became difficult for juries to understand.

Ultimately, it was U.S. Supreme Court Case Graham vs. Connor that outlined how courts deem force used by an officer to be reasonable, Lander said.

The case, which was decided in 1989, saw a unanimous decision by the court that reasonable force is to be determined by the Fourth Amendment’s “objective reasonableness” standard, according to the case summary by Oyez, a website of case summaries, transcripts and audio of U.S. Supreme Court Cases.

Justia, another website that provides case law summaries and transcripts for U.S. courts, states in its syllabus for the case that reasonableness must be determined “in light of the facts and circumstances confronting (an officer), without regard to their underlying intent or motivation.”

It also said that it must be judged from the perspective of a reasonable officer on the scene, with the understanding that officers often must make split-second decisions on the amount of force necessary for a situation.

Lander said MDPS has had a policy that reflects the Supreme Court’s decision in Graham vs. Connor since he started working at the department in 2002.

But, Lander said, policy is irrelevant if it isn’t followed up with the right training.

He and Lowdermilk said officers go through annual training on various topics, including hands-on use-of-force and deescalation tactics.

During deescalation training, officers are presented with scenarios and instructed to use deescalation tactics to talk the subject down and calm the situation.

In use-of-force training, officers are put in scenarios where they are instructed to use less lethal force to gain control of a situation, Lowdermilk said. Role players act out the situations and officers have to respond appropriately to what’s going on.

All of that training aside, MDPS officers rarely use force. Of the 39,660 calls MDPS responded to in 2019, ranging anywhere from 911 hangups to domestic disturbances and other crimes, officers used force 16 times, Lander said.

When force is used, there is a comprehensive reporting and review process, Lowdermilk said.

Body cam, dash cam, witness statements, officer reports and any other evidence of the incident are reviewed by supervisors, Lowdermilk said.

“Actually, four different supervisors look at every use of force and have to sign off on it,” Lowdermilk said.

Each of the four supervisors review the incidents independently to make their own decision on whether the use of force was justified.

That review happens anytime officers use pepper spray, their batons, Taser or any type of hard hands force, Lowdermilk said. He explained hard hands as an officer having to use their hands to take a suspect to the ground or physically arrest them.

Outside of use-of-force claims, MDPS has quarterly reviews of statistics of arrests to ensure that officers aren’t targeting any particular groups, Lander said.

He said high-liability areas are managed by supervisors who have to give presentations quarterly to all of the supervisors about statistics of stops to make sure there aren’t any problems and see that any needed training is acquired.

“There’s a checks and balances there to make sure that everything is lining up accordingly based off that,” Lander said.

Those meetings will resume once the threat of COVID-19 lessens.

MDPS wants to be as transparent as it can be, Lowdermilk said.

Lowdermilk added that MDPS constantly looks for ways to be involved in the community, and even has a community services division.

Lander said over the last year, officers with that division went around to Morganton Housing Authority developments to talk with residents about what needs and concerns they had. The officers have also handed out ice pops to people at Catawba Meadows Park.

“There’s a lot of little things I feel like our agency does that may or may not be in the press on a daily basis but we, again, try to make an active effort in building relationships with all of our community members,” Lander said.

Officers have been seen over the last several weeks at protests against police brutality. Lander said their main priority is to make sure everyone is safe, but they also support the movement that reignited after George Floyd’s death May 25.

“We support why they’re out there because we don’t feel that what happened up north was right whatsoever,” Lander said. “They have a very solid cause, very good intentions and we’re showing our support for them out there.”

He said he enjoyed getting to speak to people at the protest.

“That’s part of that transparency with our department,” Lander said. “We want to know, we want to interact with everybody and find out what people are thinking and just have an open dialogue.”

Other 8 Can’t Wait policies, like banning chokeholds, shooting at moving vehicles and requiring officers to give a warning before shooting and intervene when excessive force is being used, are accounted for in MDPS policy, Lowdermilk wrote in a guest editorial published in Thursday’s print edition of The News Herald.

Visit https://bit.ly/2YQpnc6 to read the editorial.

Public Safety's use of force policies align with best practices

MDPS Officer J. Bess (right) goes through a scenario with an actor during a 2019 crisis training course.

MDPS Lt. T. Corriveau (left) goes through a scenario where the caller was battling mental health problems during a 2019 crisis training.

Capt. Keith Bowman (second from left) poses for a photo with a family at a recent protest in downtown Morganton.