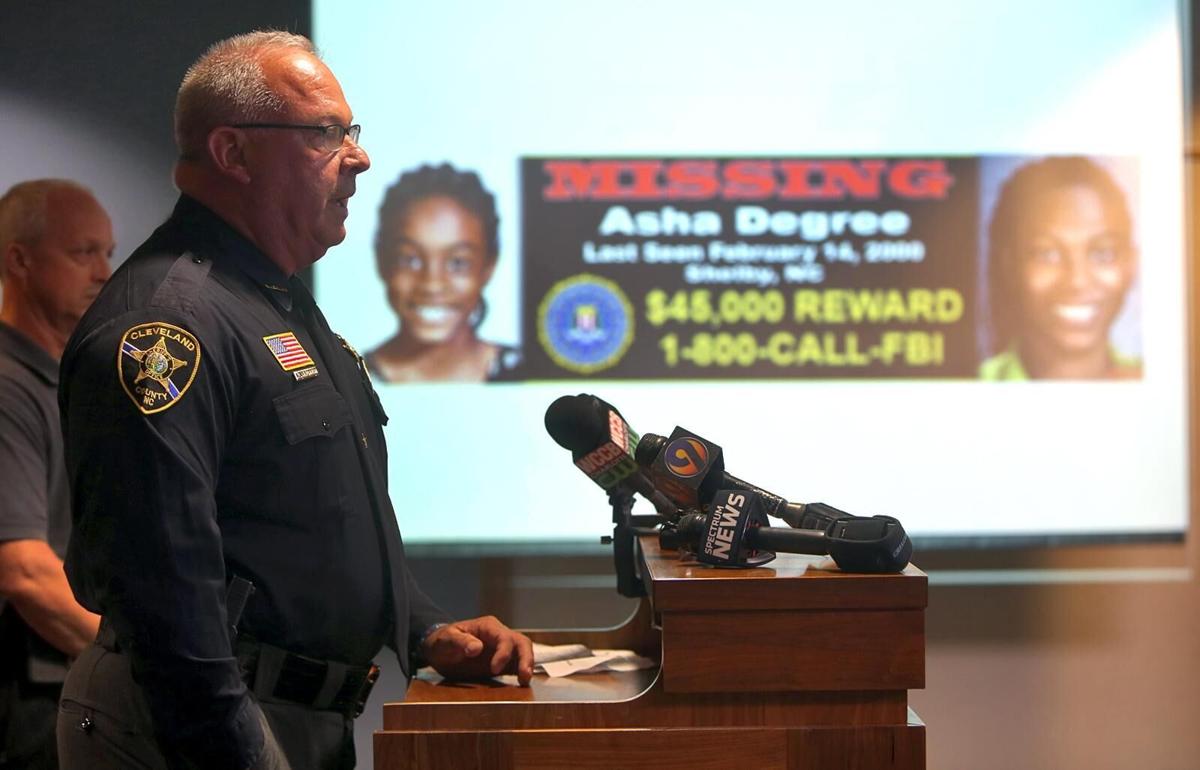 Cleveland County Sheriff Alan Norman speaks on the use of CARD, or Child Abduction Rapid Deployment team in the investigation of Asha Degree's disappearance. 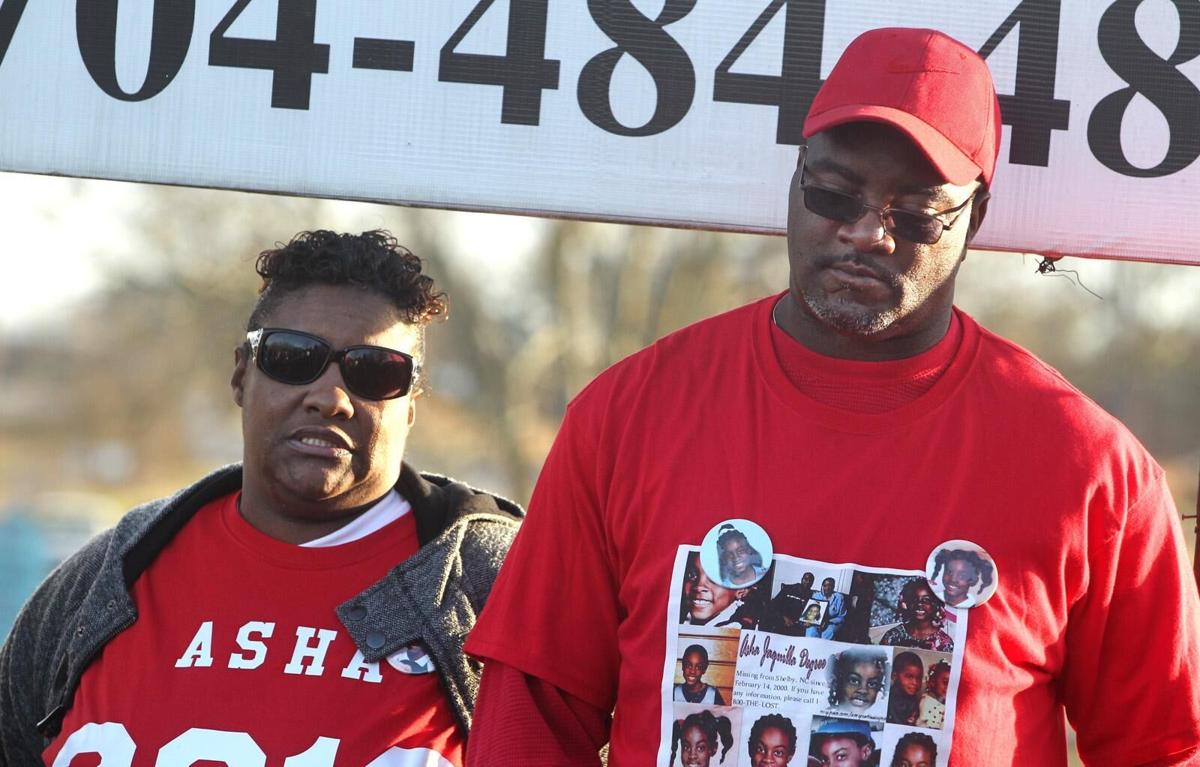 Iquilla and Harold Degree attend a walk in honor of their missing daughter, Asha Degree, in 2013.

The Star of Shelby Distributed by Tribune Content Agency

For one family in Cleveland County, Valentine's Day marks a painful anniversary — the day a 9-year-old girl vanished.

Clues have been uncovered in the nearly-21 years since Asha Degree's disappearance, including a book bag found in Burke County.

Local, state and federal investigators continue to try and solve the mystery of what happened to Asha, and they may have a new lead.

A prison inmate recently sent a letter to The Star of Shelby in which he says he knows what happened to the fourth-grader nearly 21 years ago.

Marcus Mellon wrote to the news outlet to say that the child was killed, and he knows how and where to find her.

Letter to the editor

Mellon, 53, was convicted of sex crimes against children in Cleveland County in 2014.

In his letter to The Star, Mellon says he has information and asked that it be passed along to the FBI.

Mellon asked investigators to visit him to find out what happened. Here is what he wrote:

Asha Degree has been missing for over 20 years. About four months ago I had found out her whereabouts and what had happen to her. She was killed and then took and buried. I do know how and what town she is in. I hope you get this letter and do come see me. It's on the up and up.

Cleveland County Sheriff Alan Norman said the tip will be followed up on, but an obstacle will slow the process.

Mellon is serving nearly 14 years in prison and is housed at Alexander Correctional Institute where there currently is a COVID-19 outbreak. Norman said that investigators from his department and the FBI will interview Mellon when the situation at the prison is under control.

Though the child vanished more than 20 years ago, tips still get reported. According to the FBI, 45 came in last year.

Whether Mellon actually has knowledge of what happened to Asha, Norman said all tips are investigated. The sheriff did note that sometimes inmates have ulterior motives such as bargaining for preferential treatment during incarceration.

"We treat every piece of information that we receive as good information until we prove otherwise," Norman said.

On the morning of Feb. 14, 2000, Asha's parents, Harold and Iquilla, went to wake her for school, but she was nowhere to be found.

Investigators heard from two people who said they saw a girl walking along N.C. 18 around 4 a.m. One person said when they went back to check on her, the child disappeared into the woods.

She hasn't been seen or heard from since.

Investigators have their theories on why Asha left her home before dawn, one being that she was upset over her performance in a basketball game.

More than a year after her disappearance, Asha’s book bag was found in Burke County, buried along N.C. 18 South in Burke County, according to law enforcement officials at the time. Construction workers found the backpack when they were excavating the area for a driveway.

Years later, investigators released photos of a book and a shirt that were inside the bag in an effort to spark renewed interest.

Tips have also come in to suggest Asha may have gotten into a 1970s Lincoln Continental or Ford Thunderbird.

A task force has been formed to continue trying to solve the mystery of what happened to "Shelby's Sweetheart."

Hope of a safe return

Asha's parents continue to hold out hope that their daughter will return home.

They host a walk each year on the anniversary of their daughter's disappearance, which is also their wedding anniversary.

Billboards in Cleveland County show a smiling Asha as she looked nearly 21 years ago and a computer-generated photo of how the 30-year-old woman may look today.

Local and federal money has remained in a pool for years, offering a $45,000 reward for information leading to a resolution in the case.

"If anyone knows anything whatsoever that they think is insignificant, it may be the piece of the puzzle to bring Asha home and bring closure to the family," Norman said.

A 20-year-old died in an NC jail. His family says a lack of information makes them skeptical of sheriff's claims.

The family of a man who died at the Iredell County Detention Center is asking for answers, but so far are finding few.

For one family in Cleveland County, Valentine's Day marks a painful anniversary — the day a 9-year-old girl vanished.

A suspect in a fire in Sherrills Ford appears to set himself aflame and drop a bag of money in a video released Thursday by the Catawba County Sheriff’s Office.

Cleveland County Sheriff Alan Norman speaks on the use of CARD, or Child Abduction Rapid Deployment team in the investigation of Asha Degree's disappearance.

Iquilla and Harold Degree attend a walk in honor of their missing daughter, Asha Degree, in 2013. 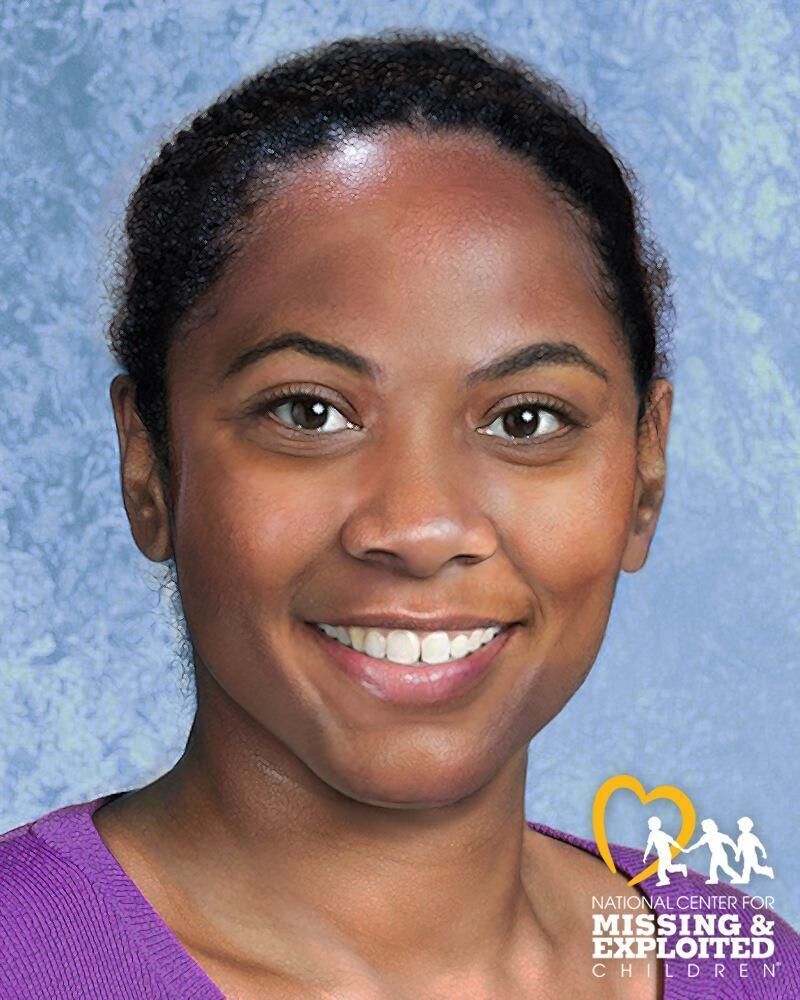