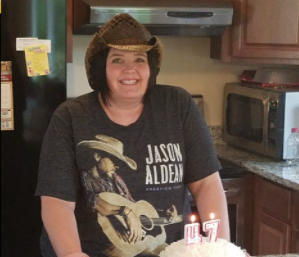 Tangela Parker, seen here in a new photo released by the Hickory Police Department, is still on the run a week after the fatal shooting of Phelifia Marlow at TCS Designs.

Alexander County residents Tangela Parker (left) and Eric Parker are wanted in connection with a Jan. 13 murder at TCS Designs. 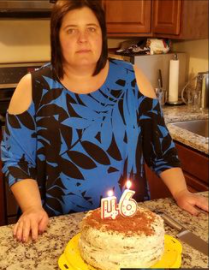 Two of the photos show Tangela Parker, who is charged with the Jan. 13 murder of Phelifia Marlow, standing behind birthday cakes. A third photo shows Tangela with Eric Parker, who is wanted for accessory after the fact to the murder.

Tangela Parker and Marlow were coworkers at the furniture plant.

The U.S. Marshals service is offering a $5,000 for information leading to arrests.

Kevin Griffin is the City of Hickory reporter at the Hickory Daily Record.

Suspects named in fatal NC shootout with deputy. Officer who was shot is recovering.

Have you seen them? Investigators believe an Alexander County couple wanted in the Jan. 14 murder of Hickory furniture plant employee Phelifia Marlow may still be in western North Carolina.

A Hanover County man who told police he was a high-ranking member of the Ku Klux Klan was sentenced Tuesday to three years and eight months in jail for driving through a crowd of protesters in Henrico County last summer.

Man with NC ties charged with human trafficking, forcing prostitution. He was on probation after similar charges in Randolph County.

MIAMI — A convicted pimp who formerly lived in North Carolina and his alleged accomplice are in custody, accused of grooming an 18-year-old fr…

An avowed member of the Ku Klux Klan now faces a lighter sentence and has fewer misdemeanor convictions after appealing lower court convictions for driving his truck through a crowd of Black Lives Matter protesters last summer in Henrico County.

A student at South Iredell High School reported being raped on the school campus and a juvenile is facing charges, said Troutman Police Chief Tina Fleming.

Tangela Parker, seen here in a new photo released by the Hickory Police Department, is still on the run a week after the fatal shooting of Phelifia Marlow at TCS Designs.

Alexander County residents Tangela Parker (left) and Eric Parker are wanted in connection with a Jan. 13 murder at TCS Designs.