North Carolina’s voter ID law was upheld Wednesday by a federal appeals court, but whether that means voters will have to show photo ID in next year’s elections remains to be seen. 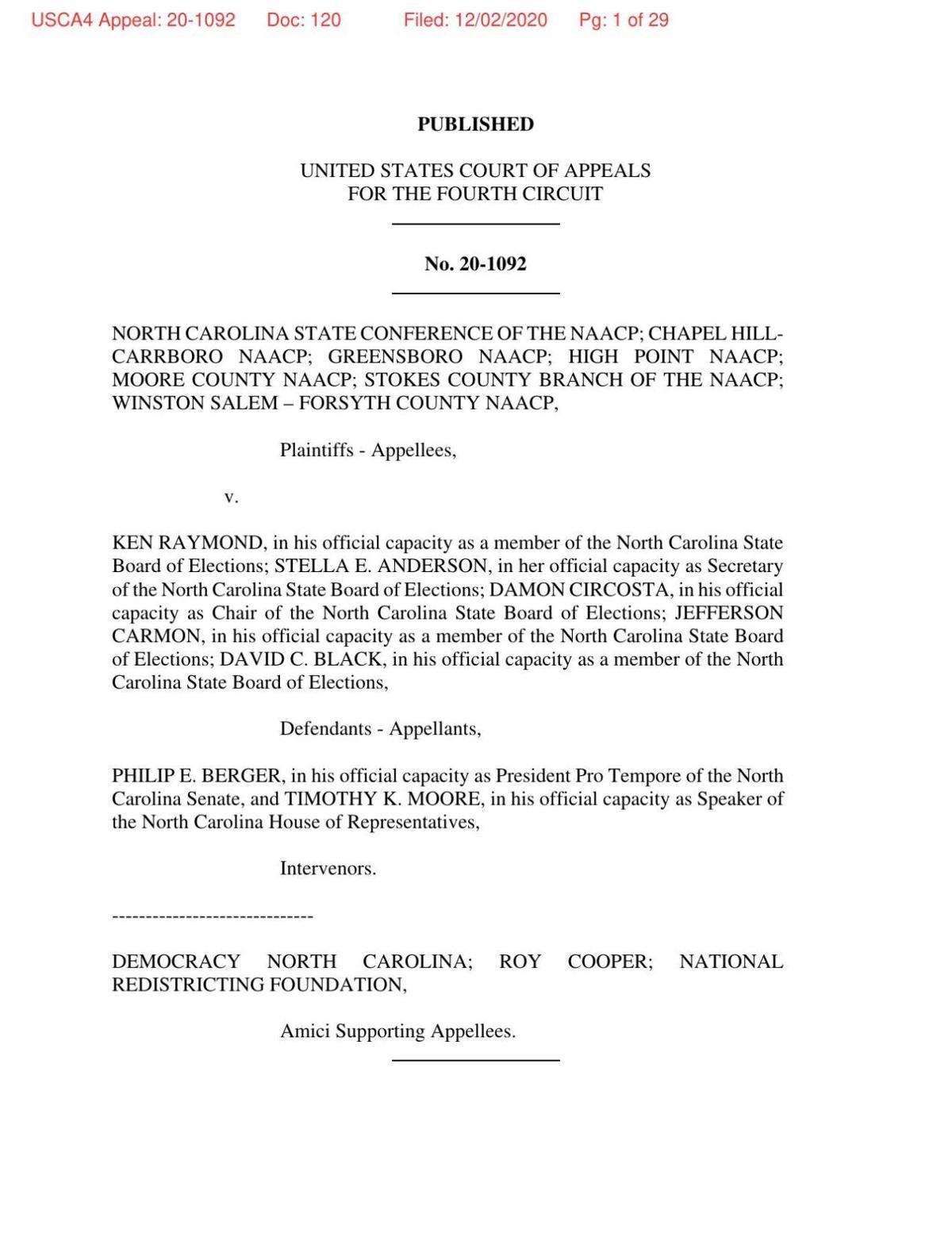 The 4th U.S. Circuit Court of Appeals reversed a decision by U.S. District Judge Loretta Biggs that temporarily blocked the voter ID law, which state Republican legislators passed in 2018. A three-judge panel said Biggs was wrong to say that state Republican leaders had racially discriminatory intent in passing the law and unfairly based her decision on circumstances surrounding a previous elections law that the court struck down.

It was the second time in recent history that North Carolina’s elections law made its way to the 4th U.S. Circuit Court of Appeals. The first time, the court said that state Republican legislators used a 2013 elections bill to make it harder for Black people to cast ballots.

But this time, the court said, there was little evidence that state Republican legislators had racist intent in passing the photo ID law.

“The outcome hinges on the answer to a simple question: How much does the past matter?” the judges said in their ruling. “A legislature’s past acts do not condemn the acts of a later legislature, which we must presume acts in good faith.”

Judge Julius N. Richardson, who was appointed by President Donald Trump, wrote the opinion. Judges Pamela A. Harris, appointed by former President Barack Obama, and A. Marvin Quattlebaum Jr., appointed by Trump, concurred with the decision.

The recent controversy over state elections law started in 2013. That’s when the U.S. Supreme Court invalidated a section of the Voting Rights Act that required states and counties to get federal approval for any changes in elections laws. In North Carolina, state Republican leaders pushed through an expansive list of changes in elections laws, including requiring photo ID, getting rid of same-day voter registration and limiting early voting. A lawsuit was filed, and the 4th U.S. Circuit Court of Appeals struck down the law in 2016.

But soon after, state Republican legislators put a constitutional amendment on the ballot requiring voters to show a photo ID. In 2018, that amendment won approval from voters, and a Republican-led General Assembly approved a voter ID law in December 2018.

The N.C. NAACP and several local chapters, including Winston-Salem, filed a federal lawsuit challenging the voter ID law. Two other lawsuits at the state court level have also been filed.

The federal appeals court judges said Biggs discounted major differences between the 2018 law and legislation passed in 2013. The new law, the judges said, offered numerous ways for voters who didn’t have photo ID to cast their ballots or to obtain a free photo ID. And because of the constitutional amendment, state legislators had to pass a voter ID law, the judges said.

While acknowledging North Carolina’s long history of racial discrimination, the judges said this is not the same set of circumstances that caused the appeals court to strike down the 2013 elections law.

“Now that a federal appeals court has approved North Carolina’s voter ID law and constitutional amendment, they must be implemented for the next election cycle in our state,” N.C. House Speaker Tim Moore, a primary sponsor of the voter ID law, said in a statement on his website.

Senate Leader Phil Berger called Biggs an activist judge who he said overturned “the will of millions of North Carolinians who added a voter ID requirement to their own constitution.”

“I’m heartened by the Fourth Circuit’s unanimous decision in support of the basic principle of self-governance under the rule of law,” Berger said in a statement.

The court’s decision Wednesday does not mean the photo ID law can immediately be implemented. A preliminary injunction was issued in the state lawsuit, and trials will be held next year in both the federal and state lawsuits.

And the N.C. NAACP may appeal the decision. Irving Joiner, an attorney for the NAACP, said in a statement that attorneys are reviewing the decision.

“We steadfastly believe that the Honorable Judge Biggs’ findings and determinations were correct at the preliminary injunction phase,” he said.

Rev. T. Anthony Spearman, president of the state NAACP, said he believes the plaintiffs will be vindicated at trial.

“The N.C. NAACP will not rest until we have vindicated fully the rights of African Americans, the Latinx community, and the most vulnerable in this state to access the sacred right to vote,” he said.