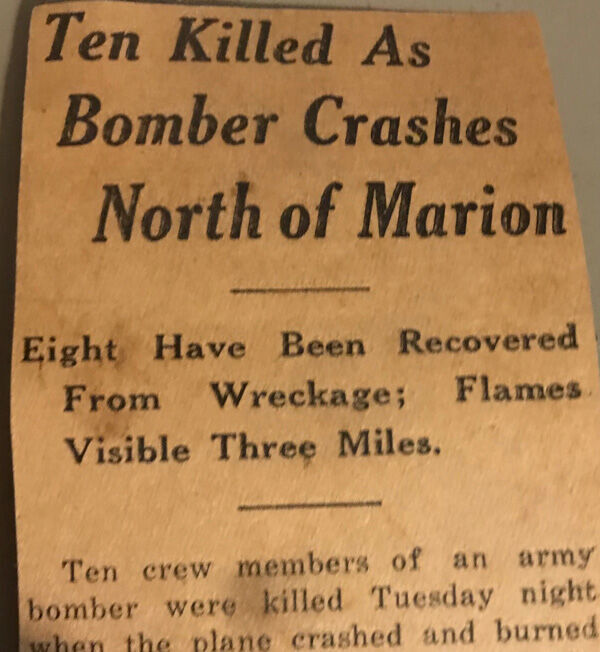 A clipping from a June 1944 edition of The McDowell News.

Twenty-five or so years ago, in the back of the newspaper building where old furniture and outdated equipment too cumbersome to haul out are stored, I rifled through an abandoned desk to see what treasures I could find.

Among the black-and-white-photos of people and places from long ago, I discovered a yellowed clipping that told a tragic and harrowing tale of what occurred June 13, 1944, in a rugged section of McDowell County.

“The plane was identified as a B-24 bomber on a combat training flight from Chatham Field, Savannah, Ga., and bodies of eight men have been recovered at this time. Officials said that a normal crew of the bomber was 10 men and soldiers from the Air Forces were searching for the two remaining bodies.”

There was nothing else about the crash in the desk. No follow up clippings. No photos. I searched through dusty bound editions — those are hardback versions of a year or six months of papers compiled for the sake of history — but I turned up nothing else. I saved the lone clipping, hoping one day I could learn more.

As the years went by, with explosion of the internet and a seemingly infinite amount of information at my fingertips, I would, probably once a year, devote a couple of hours to research, trying to learn more. All I found were a couple of similar accounts of what was in that clipping — no names, no investigation results, nothing more.

How could the deaths of 10 men in a mountainside plane crash in western North Carolina receive what seemed to be so little attention?

Then, last year, I found that others had the same question.

“Do you know about this?” my longtime friend Walt Bagwell said in a message, sent along with some of the same scant information I, too, had found.

“I’ve known for years,” I said, “but I’ve not turned up much more than this.”

It seems I was not the right man for the job.

Jim, with certain government connections and dogged determination, began an effort to find out more. I would say that Jim has a shadowy past, but that could border on libel, so I will say it’s a mysterious and intriguing past. I was happy to join his investigative team.

How we proceeded and what we found is a tale masterfully told by Jim as part of this project.

I also answered the question I asked many years ago: How could the deaths of 10 men in a mountainside plane crash in western North Carolina receive what seemed to be so little attention?

The sad truth is, it was not an uncommon occurrence.

On June 13, 1944, the day that B-24 on a combat training mission lost its way and crashed into a North Carolina mountainside, there were more than 70 other reported military crashes stateside, according to Aviation Archeological Investigation & Research. More than 70 on a single day.

That, tragically, was not out of the ordinary as the fight for freedom raged.

In all, according to historical and aviation experts, 15,000 airmen were killed in training in World War II.

I was proud to be a part of Jim Williams’ quest to learn more, document the site and honor the memories of those who died.

Killed in the plane crash were these young airmen:

Scott Hollifield is editor and general manager of The McDowell News in Marion and a humor columnist. Email him at rhollifield@mcdowellnews.com.

Drought-stricken California trucks its salmon to the sea

Drought-stricken California trucks its salmon to the sea

The Pratt and Whitney R-1830 Twin Wasp, 1200 horsepower, 14-cylinder, radial engine was throttled back to its cruising speed of about 175 mph.

A clipping from a June 1944 edition of The McDowell News.