Musician Eddie Van Halen poses with his "Frankenstein guitar" before the "What It Means to Be American" program at the Smithsonian's National Museum of American History in Washington on Feb. 12, 2015. Van Halen, who had battled cancer, died Tuesday, Oct. 6, 2020. He was 65. 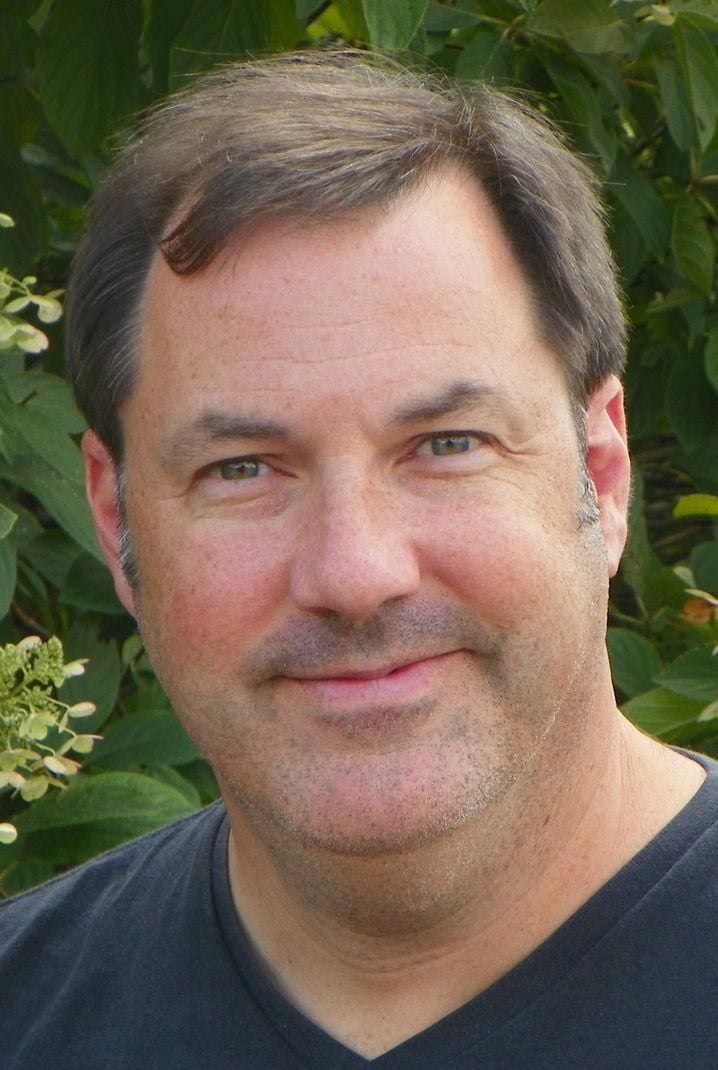 During that tumultuous transition from pre-adolescent to full-flower adolescent, I was the tall, skinny, gap-toothed, church-going, never-in-trouble, and somewhat bookish “fine and upstanding” kid. But I had a friend, Wayne, who was the rebel kid who just looked like a problem. He wore a watch attached to one of those riveted leather punk rock wrist cuffs, shirts with the sleeves cut off, always blue jeans and never shorts, a wide riveted leather belt, biker boots, a necklace with a skull on it, and the thickest Coke-bottle glasses of any kid in my class.

During recess on a cool October day in sixth grade, Wayne told me to bring my black Panasonic tape player/recorder to the back of the old gym where we’d be out of sight from teachers and other students. I felt the surge of adrenaline that he was going to introduce me to dangerous sounds that might melt my face, get me in trouble (to the extent that I knew what real trouble was), or maybe invoke demons from the depths of a place I was afraid to name out loud. Instead, he busted me out of the prison of sonic childhood. The song we played was called “Romeo Delight” by a band I had been told might be devil-worshippers: Van Halen.

I was worried terribly about being caught listening to that primal, Dionysian bit of mayhem—but that damn guitar had grabbed me by the throat! I’d never heard anything at all like Eddie Van Halen playing his “Frankenstrat”. It was dangerous. It had to be loud, as loud as I could make that little black box go. It was frenetic, then teasingly quiet, then oh so loud again. Wayne watched me hear it, nodding because he knew that now he had become the dealer for a genuine rock music addiction. It was exhilarating feeling my heart beat so fast just from hearing the sounds coming from the tape player my loving mother innocently entrusted to me—but that wailing and wavering electric guitar rising over the insistent percussion. I’d never heard anything like how that guy seemed to pull and stretch notes out of the guitar, then gently tickle the strings, then plow hard, fast, and strong into the heavy riffs. It hit me so hard that I felt guilty that night when my mom asked if anything interesting had happened at school.

After that day, Wayne would share more Van Halen albums. Those characteristic Eddie Van Halen tapped arpeggios that he played with both hands on the fretboard always stunned me, especially when they were conveyed by his brother’s turbulent drumming and often couched between sheer rock aggressiveness. At that same time, Van Halen would play on Michael Jackson's "Beat It," a song that brought notoriety well beyond the heavy metal crowd. For me, that question about whether I was tempting spiritual fate by listening to a guitar player with such a devil-may-care attitude faded in my consciousness because my friend, Wayne, was just a genuinely good person and this music he’d introduced me to had only tempted me to play the music louder, but never to worship the lord of the underworld.

When Van Halen released their platinum album 1984, the first single they released was “Jump.” I hated it. I griped about it out loud because it just seemed so staged for the Friday Night Videos and MTV era. Still, I needed to hear the whole album. BAM! “Panama,” “Hot for Teacher” (which I was), and “Drop Dead Legs” were just straight ahead yet meticulously elegant guitar-driven awesomeness. The song I couldn’t help but love was “I’ll Wait,” not because of the lyrics but the dark musicality of guitar-god Eddie playing keyboard, as he did on “Jump.” While the purists whined, like I did, about keyboards showing up on a Van Halen record, Van Halen was looking to take the band that bore his and his brother’s name to more than just heavy metal fans. Shouldn’t a gift like Van Halen’s be shared as widely as possible?

That’s the part of the history where David Lee Roth left the band and Sammy Hagar joined. The purists, who are never satisfied, complained that Van Halen of the late 80s and early 90s weren’t really Van Halen. They couldn’t have been more idiotically wrong. Eddie Van Halen had always been the driver of the band’s mind-bending sound, but adding just a wee bit of emotional depth to the lyrics came at just the right time for me when I was in high school with all of the unpredictability of emotions and desires a teenaged boy goes through. “I don’t know what I’ve been livin’ on but it’s not enough to fill me up,” sang Hagar while Eddie dependably brought about new guitar pyrotechnics. He continued to define rock guitar now with soaring solos arcing over the tops of power ballads and hard-driving anthems, alike, making the new Van Halen Halen arguably the best of the rock bands of the 80s. They didn’t need make-up or ridiculous outfits (though one might argue that a spandex unitard in public is at least a little bit ridiculous)—all they needed was Eddie Van Halen, the master of playing fast, playing rough, and playing soulful melodies that could bring tears to your eyes as fast as they raised chills up your spine.

Wayne and I grew apart, as too often happens. He had opened up a window to a world I might have stumbled upon later, but he gave me a gift at a time I really needed it. Looking back it’s as obvious as anything why I’ve grown to love the bands I love. For example, when I first heard a bootleg of Pearl Jam’s Mike McCready playing Van Halen’s iconic electric guitar opus, “Eruption,” not only did that show how far-reaching Eddie’s influence was, but also I decided that I wasn’t totally cracked for loving Pearl Jam.

All of that came flooding back to me when I heard that Van Halen had died from the throat cancer he’d had for a few years, the second kind of cancer he’d had. But it was something more than sentimentality for me. Van Halen had re-defined rock guitar forever, becoming possibly the greatest guitarist of all-time (If you doubt that claim, then I challenge you to listen to the first three Van Halen albums from beginning to end and say what other guitar players rival him—at the very least that’s a short list). But there was more to him than just his image as a reckless rock star. He ould bring fire and rain from the tension of six strings tied to a block of wood.

For all of the notoriety of his relationships and partying life, his playing and showmanship revealed a dedication to making his music important as a total experience. And he paid high prices for it. His body was broken and busted by years of stage acrobatics. He had recovered from drug and alcohol addictions that seemed an inseparable part of his persona. Through all of that, he continued to create and play music, his avenue to his life’s meaning. In his music, Van Halen showed how wonderfully dangerous rock music can be, how remarkably expressively it can be. By playing like nobody else ever, Eddie Van Halen let us in on his joy, his sadness, his desires, and even his own life-giving spirit. He sure gave me life.

News Herald Correspondent Jonathan Henley is a United Methodist pastor, former host of Road Signs radio show, and a music fan. He writes a weekly column for The News Herald. Contact him at roadsignsradio@gmail.com.

Musician Eddie Van Halen poses with his "Frankenstein guitar" before the "What It Means to Be American" program at the Smithsonian's National Museum of American History in Washington on Feb. 12, 2015. Van Halen, who had battled cancer, died Tuesday, Oct. 6, 2020. He was 65.