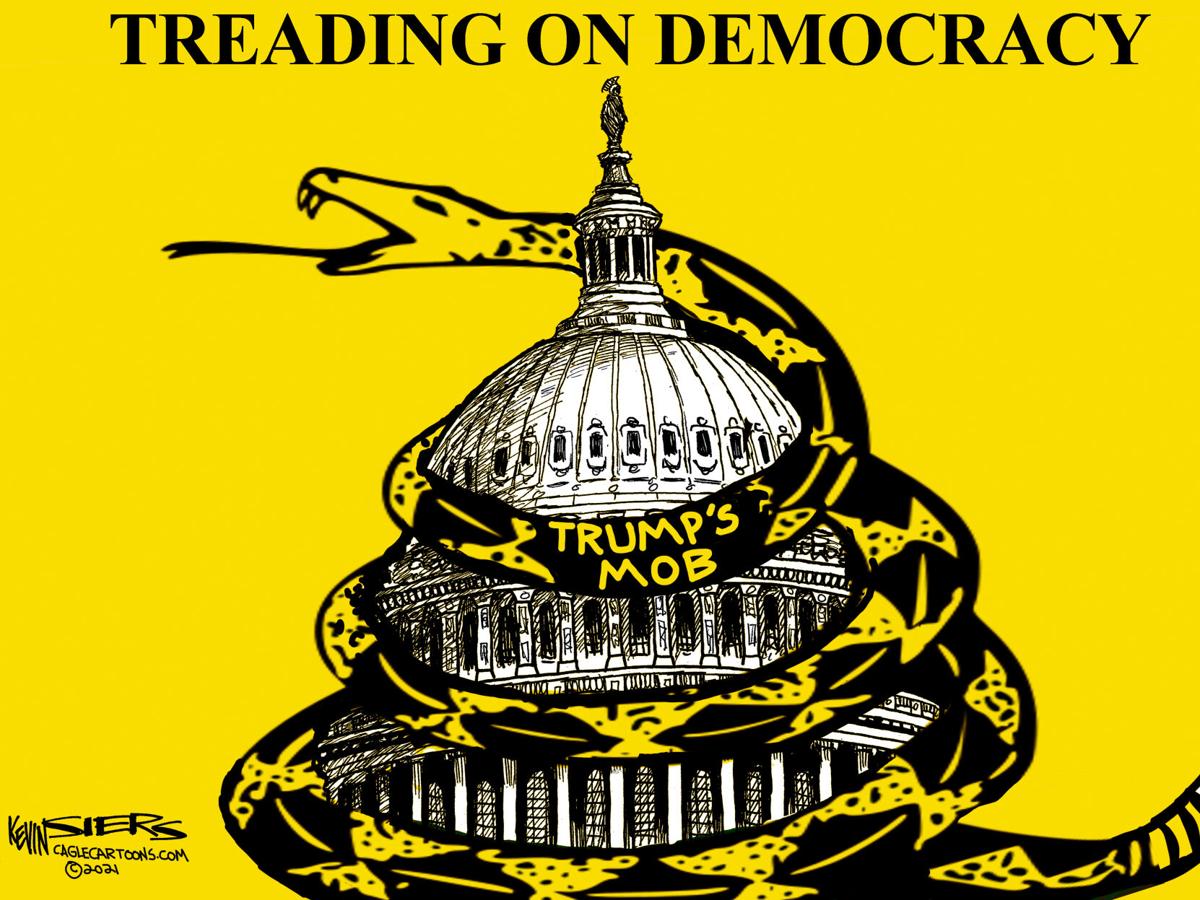 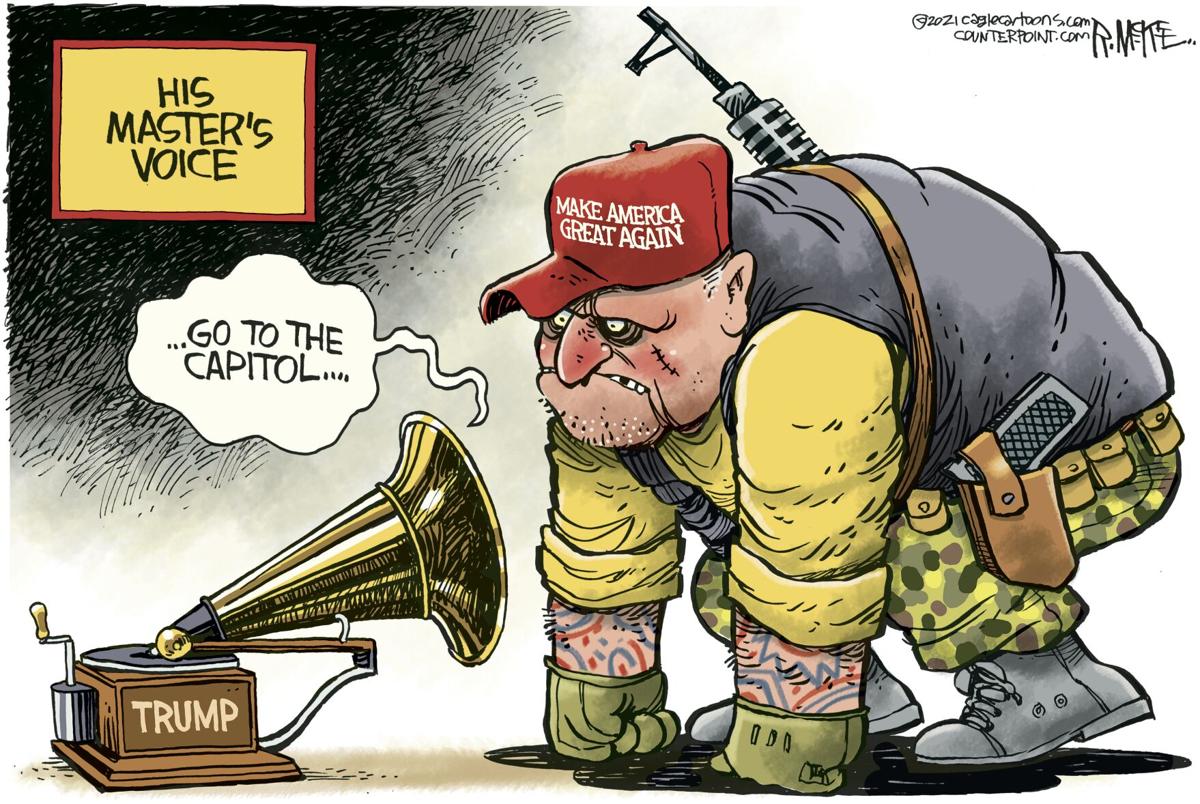 That refusal so infuriated Trump that he appeared at a rally in Washington, castigated his long-suffering subordinate and urged followers to march on the Capitol.

"You'll never take back our country with weakness," he bellowed.

Soon after, a mob was smashed windows, attacked police and invaded the Senate chamber, forcing Pence and others to seek safety.

Pence can't escape responsibility for Trump's abominable reign, but it's not too late to do a service to his country that no one else can do: Call on the Cabinet to invoke the 25th Amendment, strip the president of his powers and urge congressional Republicans to agree. If Pence and the Cabinet were to act, he would take over until Congress decides otherwise — which it might not do by Jan. 20, when Biden takes over.

Pence took an oath to "support and defend the Constitution of the United States against all enemies, foreign and domestic." After Trump's treacherous incitement of mob action against elected representatives of the American people, it is beyond doubt that one of the most dangerous enemies occupies the Oval Office.

But Trump does not have to be allowed to remain in power. The 25th Amendment could immediately remove the threat he poses to the peace and health of our republic. Nothing can happen, though, without the leadership of the vice president.

It may seem pointless to evict Trump now, given the vast damage he has already done and the limited time he has. But we have learned repeatedly that it is folly to underestimate his capacity for destructive mayhem.

Every day he remains in power is a day that the nation is exposed to horrendous hazards. He is the most powerful person on Earth; he is reckless beyond measure; and his looming eviction may spur him to new heights of irrationality.

What could go wrong in the time he has left? Trump could start a war with Iran, something that has long allured him. He raised the possibility with his advisers shortly after losing the election. Iran's recent decision to increase its enrichment of uranium beyond levels allowed in the 2015 nuclear deal could be his excuse.

Last month, The New York Times reported, "Since Mr. Trump dismissed Defense Secretary Mark T. Esper and other top Pentagon aides last week, Defense Department and other national security officials have privately expressed worries that the president might initiate operations, whether overt or secret, against Iran or other adversaries at the end of his term."

Trump finally issued a statement Thursday promising "an orderly transition on Jan. 20." But given his past obstinacy and his volatile nature, it would be unwise to bet the nation's future on that grudging commitment. He could just as easily call on his followers to flood into the capital to prevent Biden's inauguration.

As long he remains president, Trump also has the power to dispense executive clemency like Halloween candy. He could pardon more confederates and war criminals, and he could grant himself a pardon — which might or might not be valid.

If I were one of the deranged marauders who forced their way into the Capitol and pillaged congressional offices, I would be appealing to Trump to spare me and my accomplices from going to jail. Who would be surprised if Trump agreed? On Wednesday, asking the rioters to go home, he added: "We love you. You're very special."

Reckless choices and gross abuses are not the only risk. Trump has been largely AWOL for the last two months, even as a raging pandemic kills thousands of Americans every day. When the federal government was hit by a massive cyberattack, he shrugged it off. If some international or national crisis erupts in the coming days, Trump cannot be trusted to handle it responsibly.

He has no interest in his job, beyond hanging on to it by any means necessary. He has abdicated his most rudimentary responsibilities. I suspect no one knows this better than his vice president.

OPINION: Media have every right to cancel Trump

So, President Donald Trump has been booted off Twitter, as of now forever. Facebook also gave him the heave-ho. Apple and Google, meanwhile, h…

OPINION: Disgraceful discourse ours to correct

Without grace, our public discourse will continue to suffer.

OPINION: Trashed Capitol should revolt us all

RALEIGH — It was the summer of 1987 when I first stepped inside the U.S. Capitol to work instead of visit.

After the siege, we need civics education

If the last five years in American politics have taught us one thing, it is that we can all use a refresher course in civics. The events of Ja…

Laying blame for riot where it belongs

You might have seen the photo by now. Of all the disturbing images of Wednesday’s insurrection, this one lingers.

OPINION: We got another inoculation

We got inoculated last week. 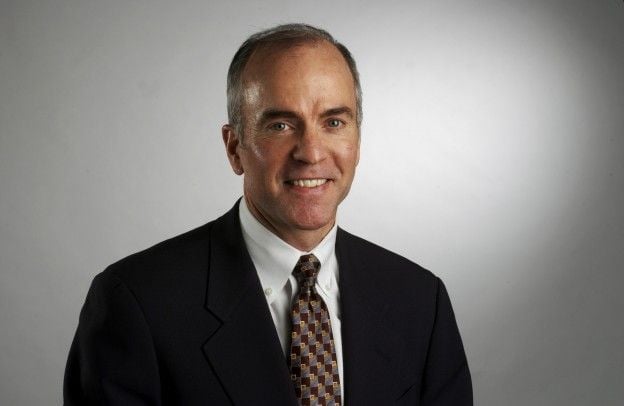