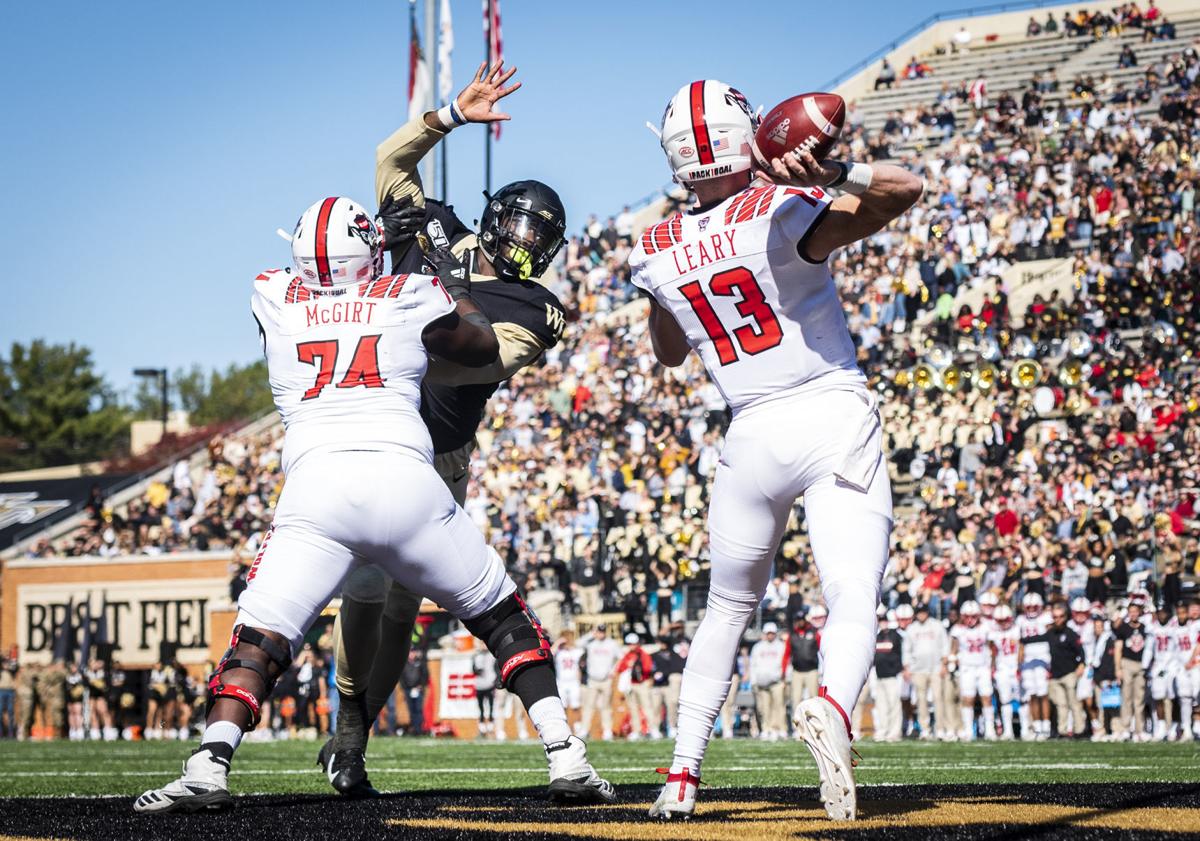 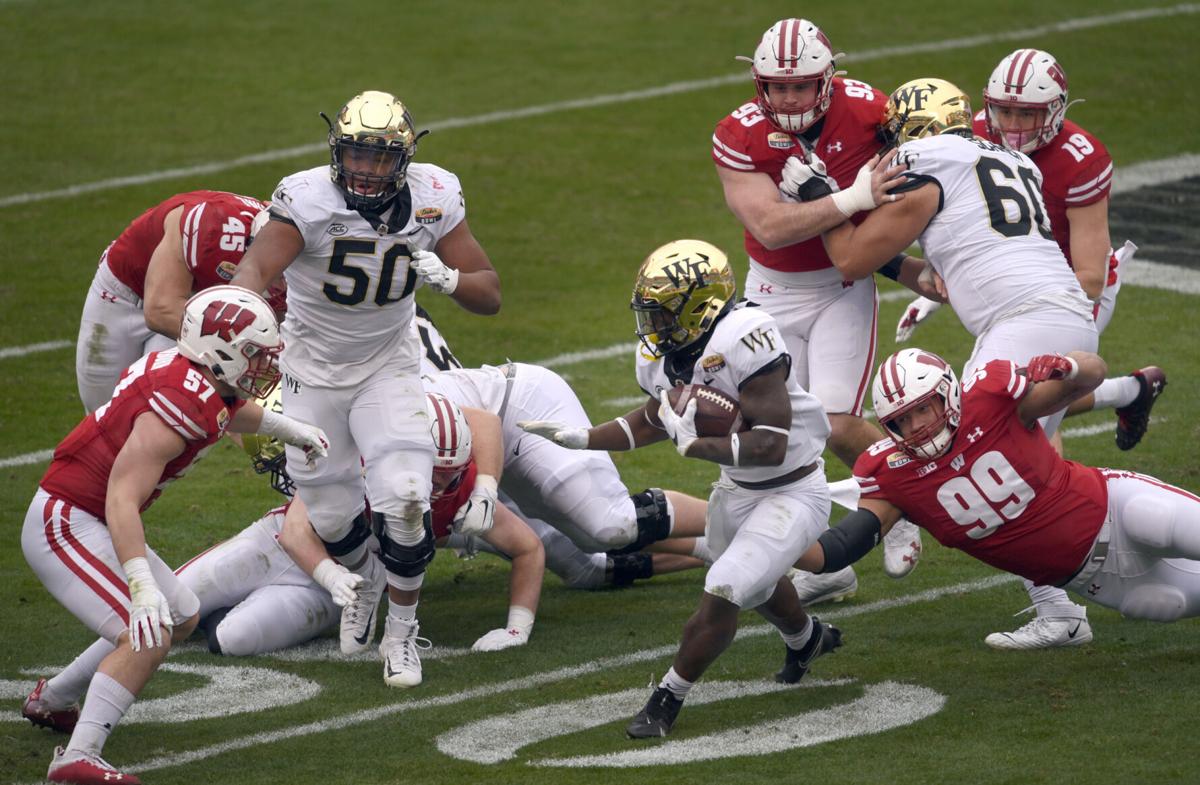 Wake Forest running back Justice Ellison looks for a hole in the Wisconsin defense in the second half of the Deacons' 42-28 loss to Wisconsin in the Duke's Mayo Bowl, Wednesday, Dec. 30, 2020 at Bank of America Stadium in Charlotte.

A look at football players in the Atlantic Coast Conference this spring who are poised to have standout seasons this fall (Notre Dame, which competed in the league last season, returned to FBS independent status in 2021):

BOSTON COLLEGE: LB Kam Arnold played in the Eagles' secondary as a freshman last season and made a case in spring to be a starting linebacker this fall. He had 15 tackles as he played all 11 games.

CLEMSON: WR Justyn Ross is expected back after missing last year due to a serious neck injury and figures to return to the form of a potential first-round NFL draft pick he showed his first two seasons. Ross, 6-foot-4, had 46 catches for 1,000 yards and nine touchdowns in 2018, then 66 receptions for 865 yards in 2019.

FLORIDA STATE: The Seminoles have high hopes for UCF transfer QB McKenzie Milton, who is returning from a significant knee injury two years ago.

LOUISVILLE: DE Yaya Diaby was a junior college standout who started seven games last season and had 18 tackles, including 2.5 stops behind the line of scrimmage. This spring, defensive line coach Mark Ivey said Diaby has added about 18 pounds of muscle was a positive on defense.

NORTH CAROLINA STATE: The Wolfpack returned starting QB Devin Leary, lost in October after breaking a bone in his left leg. He finished with 890 yards with eight touchdowns and just two interceptions in his four games before the injury.

SYRACUSE: RBs Abdul Adams and Jarveon Howard both opted out of the 2020 COVID-19 impacted season. The two are back and looking to make their marks in the Orange backfield. Howard ran for 337 yards in 2019 while Adams, an Oklahoma transfer, gained 336 yards.

DUKE: QB Gunnar Holmberg led the depth chart after spring in the race to replace last year's starter, Chase Brice, who transferred to Appalachian State. Holmberg played in six games last year behind Brice, completing 18 of 25 passes for 161 yards. He threw two interceptions and no touchdowns.

GEORGIA TECH: QB Jeff Sims is a sophomore who showed lots of promise along with lots of mistakes his first season, passing for 19 touchdowns and 13 interceptions. But Yellow Jackets coach Geoff Collins said Sims has taken positive steps this spring that will be evident in the fall.

MIAMI: WR Charleston Rambo spend his first four years at Oklahoma and could be the deep threat the Hurricanes have needed. Rambo started 24 games with the Sooners. He played in Miami's spring game and had seven catches for 74 yards.

NORTH CAROLINA: WR Josh Downs appeared in 10 games a a freshman. The 6-4 wide out figures to get plenty of opportunities with the Tar Heels top two receivers from last year gone.

PITTSBURGH: TE Lucas Krull was a Florida graduate transfer in 2020 who was expected to play a big role for the Panthers. But he played just one game due to injury. The 6-6 Krull, though, has played like an NFL first-rounder this spring, according to coach Pat Narduzzi.

VIRGINIA: TE Jelani Woods is an Oklahoma State transfer who Cavaliers coach Bronco Mendenhall called the brightest spot of the spring. Woods left the Cowboys with 31 career receptions for 361 yards and four touchdowns.

VIRGINIA TECH: DE TyJuan Garbutt started 11 games in 2019 and figured to be a bigger contributor the next season. Instead, he had personal issues at home to deal with that limited him to just four games in 2020.

Copyright 2021 The Associated Press. All rights reserved. This material may not be published, broadcast, rewritten or redistributed without permission.

Bacot, who averaged 12.3 points and 7.8 rebounds in 2020-21, earlier this offseason announced he would test the NBA Draft process but not hire an agent, meaning he could return to school.

The Mountaineers will open the 2021 season against East Carolina on Sept. 2.

Sam Mellinger: Lance Leipold appears to be a sensible hire for Kansas Jayhawks football, but ...

Please take this as the compliment it’s intended to be, because the best way to describe new Kansas football coach Lance Leipold might be effectively boring. He is a lifelong football coach who will celebrate his 57th birthday this week. He likes cheeseburgers and loves his family. He used the word consistency seven times in his introductory news conference, and continuity four. He arrives ...

In his short amount of time in Boone, Chase Brice has noticed how fervent Appalachian State fans can be. But he’s gone fairly unrecognized, the new Mountaineers quarterback said, with the only tell coming from the program gear he wears around town.

The Lenoir-Rhyne men’s lacrosse team punched its ticket to the South Atlantic Conference tournament finals with a 20-8 home win over Tusculum in the semifinals on Friday in Hickory. The 20 goals are a postseason record for the Bears, who will play in the SAC title game for the first time since 2018.

Scott Fowler: Roy Williams laughs off another bogey. This is retirement, and he’s loving it.

This is what retirement looked like for former North Carolina basketball coach Roy Williams on Wednesday:

Wake Forest running back Justice Ellison looks for a hole in the Wisconsin defense in the second half of the Deacons' 42-28 loss to Wisconsin in the Duke's Mayo Bowl, Wednesday, Dec. 30, 2020 at Bank of America Stadium in Charlotte.