Patton senior Peyton Smith posted a solid day on the mound as well as at the plate and had plenty of help Thursday in a 10-0, six-inning home victory over Northwestern Foothills 2A Conference foe West Iredell as the Panthers opened the season with a two-game sweep of the Warriors.

Smith pitched all six innings and struck out 10 in a one-hitter in which he also walked just one. At the plate, he homered and drove in two, accounting for one of PHS’ 12 hits including four extra-base hits.

Patton (2-0 NWFAC) scored once in the bottom of the second and once again in the third, then blew the game open with seven runs in the fourth.

The Wildcats (1-1 NWFAC) rebounded from a run-rule loss Tuesday to avoid the sweep Thursday in Lenoir.

Rhoney also singled and drove in a pair, and Trey Jensen homered and had two RBIs as well. Hollan Cline (single, two walks, RBI, SB) reached base in all three plate appearances, Gabe Strickland had two hits and scored a run, Abernathy walked twice and had an RBI and Marshall Byrd singled, walked and stole a base. Logan McGee singled and walked, Will Price was hit by a pitch and scored a run and Brayden Schutt hit into a fielder’s choice and scored once.

The Patriots (0-2, 0-1 Northwestern 3A/4A Conf.) led 2-0 through an inning and 5-3 through three innings in their league opener at home Friday but couldn’t survive a South six-spot in the fourth and allowed eight more runs in the seventh.

The Cavaliers (0-2 NWFAC) shut down the Bears for four innings in a scoreless battle in Claremont on Thursday before the hosts struck for all 10 of their runs in the bottom of the fifth to end the contest early. No more details were available.

Chloe Gary, Draughn’s lone senior, had two hits including a home run and drove in two runs in her final home contest Thursday as the Lady Wildcats (9-5 NWFAC) won going away to end the regular season.

Draughn finished one game out of a two-way tie between Foard and Bunker Hill for the league’s second and final automatic state playoff berth.

Paige reached on an error and also scored the team’s only run via an RBI from Danielle Foxx (2 for 3, triple). Katherine Greene also reached base for EB via a single, and Ambria White drew a walk.

Cierra Lail drove in Bridget Patrick with a third-inning single to account for the lone run Thursday for the visiting Lady Panthers (2-12 NWFAC).

Lail, Patrick and Jayla Gregg each had a hit, Hailey Snodgrass and Meredith Kearson drew a walk apiece and Patrick struck out three and walked three, allowing four earned runs in pitching the whole way.

The Lady Panthers (8-6 NWFAC) led 6-0 at the half and won big Thursday in Claremont to end the season two games above .500 and in outright third place in the league.

In between, Patton also got a first prep goal from Emma Sacchetti, while Kiera Robinson added a goal plus three assists, Ellie Sacchetti had two goals and an assist, Maria Mateo had one goal and one assist and Danielle Wilson one assist.

“The second half was devoted to Shelby getting her first goal,” Patton coach Keith Scott said. “The celebration afterwards was priceless. (This was a) special season with an amazing group of seniors that I will truly miss. … (I’m) so proud of all these ladies tonight.”

The Lady Wildcats’ Haley Lowman also enjoyed a senior night to remember Thursday in Valdese, scoring six goals for her second double hat trick of the season and tacking on one assist.

Lowman scored four or more goals in five different games this season and set a new school record with 28 goals total in the abbreviated season as Draughn (7-6 NWFAC) tied a program record for overall wins, set a new record for league wins and enjoyed its first winning seasons both overall and in league play.

Lowman’s signature goal in the victory came via a header off a ball sent in by Alexis Diaz, who scored twice. Ambria Blalock also scored a goal, and goalkeeper Ada Caballero had one save in the shutout.

The Panthers boys and girls both finished third place in a four-team NWFAC meet hosted by Hibriten on Wednesday, claiming nine total events.

The Wildcats opened the season with a tri match Wednesday at Hibriten, falling to the host Panthers 66-12 but defeating West Caldwell 48-24.

The Panthers (0-3) fell 60-23 on Tuesday at home against South Caldwell before dropping both ends of Thursday’s tri at Newton-Conover, 60-12 against the host Red Devils and 47-24 to Hibriten.

Dilan Patton (152/160; two second-period pins, tech fall) opened with a 3-0 week, while PHS teammates Kamden Stephens and Kaleb Spann, who split time at the 182 and 195 weights, opened 2-1 with a pair of first-period pins apiece.

A trio of Burke County prep golf teams plus three more individuals are set for NCHSAA regionals action over the course of the next two days.

The association also announced that it will pay catastrophic insurance premiums of more than $500,000 for 427 schools in the 2021-22 school year from its endowment.

Patton senior Charlie Gessner had waited a long time for Wednesday to arrive. 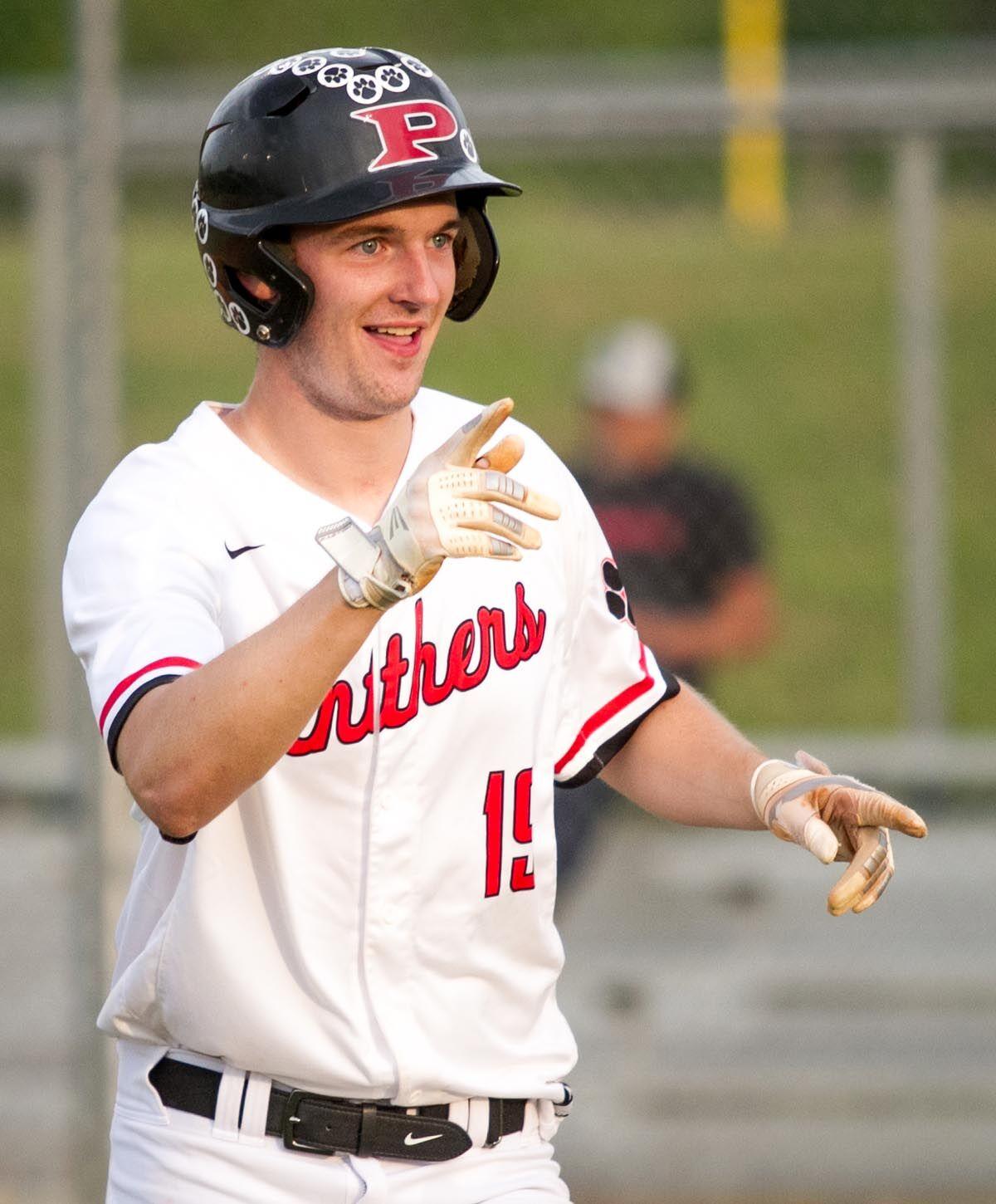 Patton’s Peyton Smith smiles toward his team’s dugout as he trots back to the bench after hitting a home run Thursday against West Iredell. 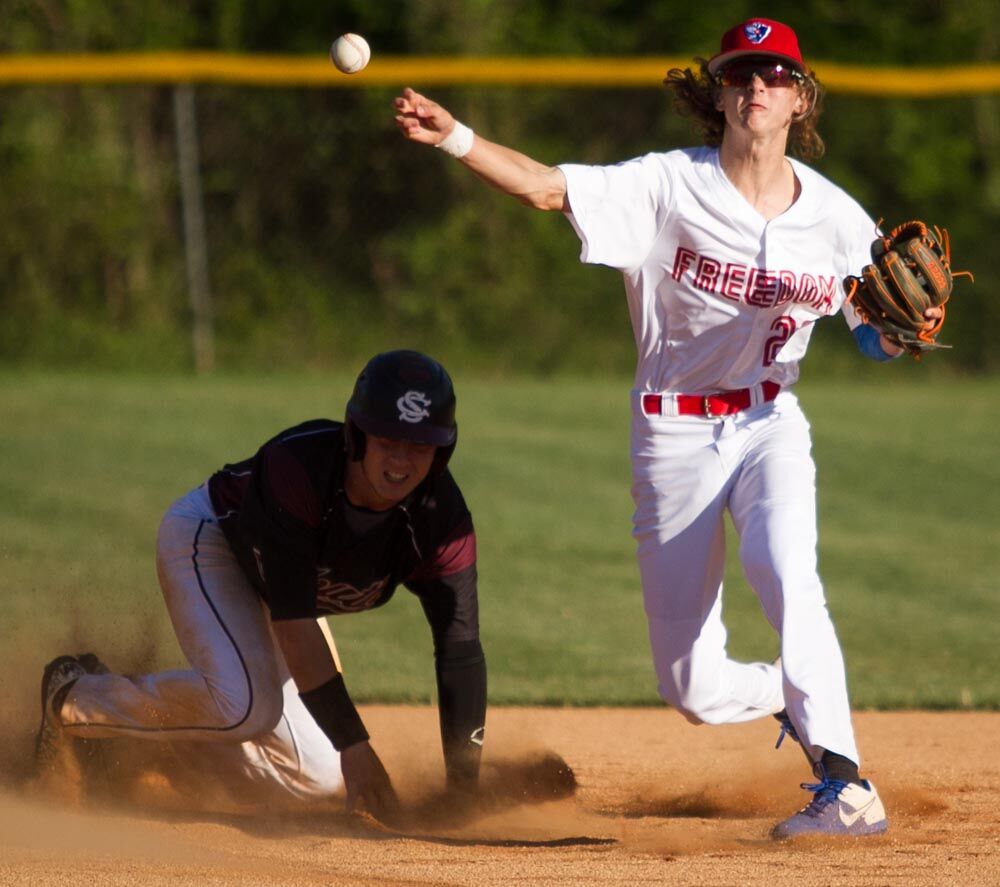 Freedom second baseman Carson Dyson, right, throws to first base looking to complete a double play on Friday at home against South Caldwell.